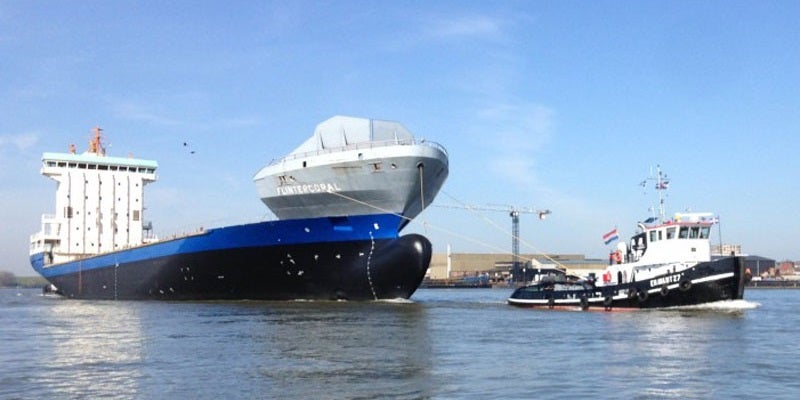 Rotra Vente is the first of two roll on/roll off (Ro/Ro) vessels being built by Concordia Group and Holland Shipyards for Siemens. The vessel is specifically designed for the transportation of large wind turbine components such as nacelle and rotor blades.

The Rotra Vente ship was installed with rudder and propeller systems at Shipyard de Schroef in Sas van Gent. It was outfitted at Holland Shipyards yard in Hardinxveld-Giessendam. The design and construction took ten months to complete. The project involved the participation of numerous companies from Werkendam and the surrounding area.

"The ship was delivered in December 2016, while the second vessel in series, Rotra Mare, is currently under construction and is scheduled for completion in 2017."

The ship was delivered in December 2016, while the second vessel in series, Rotra Mare, is currently under construction and is scheduled for completion in 2017.

Rotra Vente is based on the hull of an existing container ship, which was modified into a special service heavy cargo vessel with ramp. The forward hull accommodates the characteristic movable bow, while the stern section of the hull houses the wheelhouse.

The insulated accommodation spaces aboard the vessel offer superior comfort for crew. The ship is also equipped with the latest cargo handling technology.

The specially designed propulsion, in proportion with the hull form and performance criteria, delivers high-fuel efficiency. The vessel is anticipated to reduce logistics costs by 15%-20% when compared with the existing transport modes.

The bow and extendable ramp are moved using hydraulic systems to enable the movement of large loads to/from the cargo deck. The large bow door allows the Ro-Ro vehicles to access the restructured cargo deck. The deck is covered by a collapsible roof to safeguard the wind turbine components from salty seawater spray during seafaring.

The sliding roof also ensures the loading of cargo using cranes at harbours without a Ro-Ro ramp. The flexible layout of the deck supports the carriage of up to nine wind tower sections or up to four rotor blade sets per trip. The ship also features a fully automatic ballast/de-ballast system to compensate for the transversal unequal dispersion of load.

Rotra Vente will be deployed by Siemens mainly in the North Sea for the shipping of mast, nacelles and rotor blades for wind turbines. It will carry shipments between Siemens’ new manufacturing site in Cuxhaven, Germany, and installation bases in the North and Baltic Seas.

The ship will provide Siemens with a cost-effective solution for the transportation of large nacelles utilised in direct-drive offshore wind turbines.

Rotra Vente is capable of carrying eight nacelles of the current Siemens D7 wind turbine platform, while the second vessel can transport up to 12 rotor blades.