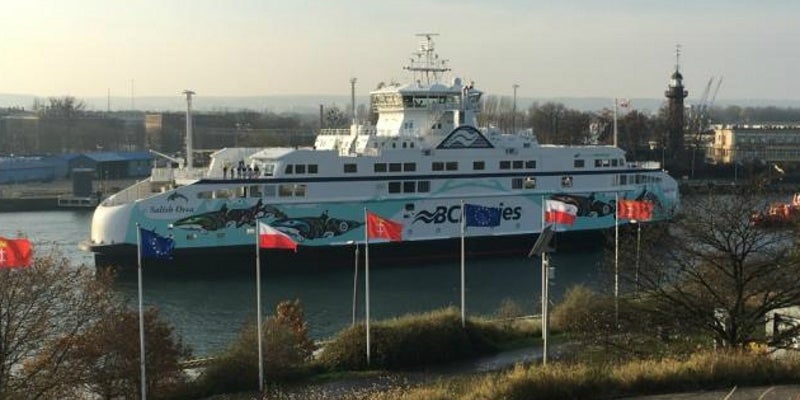 Salish Orca is the first of three Salish-class roll on / roll off (Ro-Ro) car and passenger ferries built by Remontowa Shipbuilding for British Columbia Ferry Services (BC Ferries). The new Salish-class ferries replaced the ageing Queen of Nanaimo and Queen of Burnaby ferries.

In July 2014, BC Ferries placed a $165m contract with Remontowa Shipbuilding to design, construct and outfit three new car and passenger ferries. The scope of the contract includes a comprehensive trial programme and delivery of the vessels to the home port.

The Salish-class vessels were named in the honour of the Coast Salish people, the original mariners of the Salish Sea.

The first steel was cut for the Salish Orca ferry in January 2015, and the vessel’s keel was laid down in March 2015. The vessel departed the shipyard in November 2016 and reached its homeport in British Columbia after a 50-day voyage across a distance of 10,440 nautical miles (nmi).

A series of dock trails began in February 2017 to verify Salish Orca’s interface with docks at BC Ferries terminals. The ferry entered service on the Comox-Powell River route in May 2017.

The second and third ferries in class, Salish Eagle and Salish Raven, entered service with BC Ferries in June and August 2017 respectively.

Designed by Remontowa Marine Design & Consulting (RMDC), a part of Remontowa Holding, the Salish Orca ferry was built to comply with stringent safety standards. The mono-hull vessel is certified by Lloyd’s Register and Transport Canada, as well as features artwork created by Darlene Gait, a Coast Salish artist from Esquimalt Nation.

Accommodation onboard the Ro-Ro ferry

“The vessel departed the shipyard in November 2016, and reached its homeport in British Columbia after a 50-day voyage.”

The Ro-Ro ferry houses two vehicle decks and a passenger deck featuring a lounge, a cafeteria, a gift shop and a children’s play area.

The ferry also features a galley, lockers and toilets, as well as cabins, conference rooms and mess halls for crew members.

Salish Orca is powered by three Wartsila 8L20DF engines driving two Schottel thrusters at each end. Each engine has a maximum power output of 1,350kWe at 1,200rpm, while each thruster develops a power of 1,400kW at 207rpm.

The Salish-class vessels are the first natural gas-fuelled vessels operated by BC Ferries. The LNG fuel is supplied to engines from a natural gas storage tank located between the two engine rooms.

The use of LNG is expected to cut greenhouse gas emissions by between 15% and 25%, sulphur oxide (SOx) emissions by more than 85%, and nitrogen oxide (NOx) emissions by approximately 50%, while almost eliminating particulates.

The propulsion system provides a service speed of 15.5k. Electricity for onboard systems is supplied by a 350kWe emergency generator.