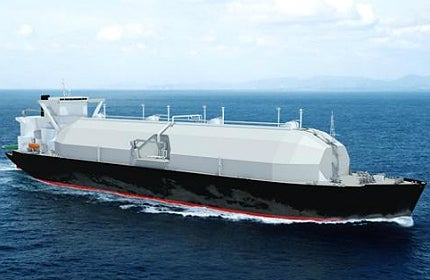 Sayaendo is a new class of liquefied natural gas (LNG) carriers being built by Mitsubishi Heavy Industries (MHI) at its Nagasaki Shipyard and Machinery Works in Japan.

The first two vessels in the series are scheduled to be delivered in 2015. The vessels were ordered in October 2011 by Osaka Gas and Mitsui O S K Lines, with construction starting in December 2012.

Eight vessels in the series have been ordered to date, the latest order being made by MI LNG Co., a joint venture between Nippon Yusen Kabushiki Kaisha (NYK Line) and Imabari Shipbuilding Co in May 2014. The vessel is scheduled to be delivered in 2017.

Ocean Breeze LNG Transport (OBLT), a joint venture between Kawasaki Kisen Kaisha and a subsidiary of INPEX, ordered a Sayaendo-series vessel in June 2013. INPEX will use the vessel to carry LNG procured from the Ichthys LNG project in Australia. Osaka Gas and Kyushu Electric Power ordered one vessel in May 2013, which will start operations in 2020 for transportation of LNG produced by the Ichthys LNG Project of Inpex.

Sayaendo Class LNG carriers are expected to have a life expectancy of 30 years, with a dock period of roughly 25 days in two and a half years. The management and operation of the first two vessels has been assigned to Mitsui O S K Lines.

Design of the Japanese LNG carriers

"The delivery of the first two Sayaendo-series vessels is scheduled for 2015."

Each of the vessel’s Moss-type spherical tanks will measure approximately 40m in diameter. The tanks will have a peapod-shaped continuous cover over them incorporated into the vessel’s hull, unlike the conventional liquefied natural gas (LNG) carriers where the upper half of the spherical tanks above the ship’s deck is covered by a semispherical dome and the lower half is supported by a cylindrical skirt structure.

The construction of complex structures to accommodate the piping, electric cables and passages atop the tanks will be done away with, unlike conventional vessels, by placing these equipments on the flat section on the top of the continuous tank cover. The design also integrates the cargo machinery room into the tank cover.

The insides of the four tanks feature a hold area, and the loading and unloading manifolds are placed between the second and third holds.

The vessel will also be equipped with a ballast water treatment system onboard and provides an option to accommodate a helideck at its aft.

The vessel will be powered by MHI’s ultra-steam turbine (UST) plant, which is a two-stage feed water reheat steam turbine system that reuses steam for heating using an automatic re-heater. It also features an advanced heat insulation system that offers the lowest LNG vaporisation rate.

It is capable of burning fuel of any combination, such as oil-only, gas-only and dual.

The vessel will be capable of operating entirely on gas during slow-speed operations and while at harbour. It is suitable for use in cold regions and ice fields due to its independent tank system.

The vessel will be further equipped with a Mitsubishi reaction fin to further enhance its performance. The propulsion system aboard the vessel will enable it to sail at a speed of 19.5kt.

The contract for the supply of the insulation systems for the cargo tanks in five of the vessels in the series was awarded to TI Group (Ti) in January 2013. The manoeuvrability analysis for the vessel was carried out by Japan Marine Science.

Port of Kobe is the fourth busiest port in Japan.