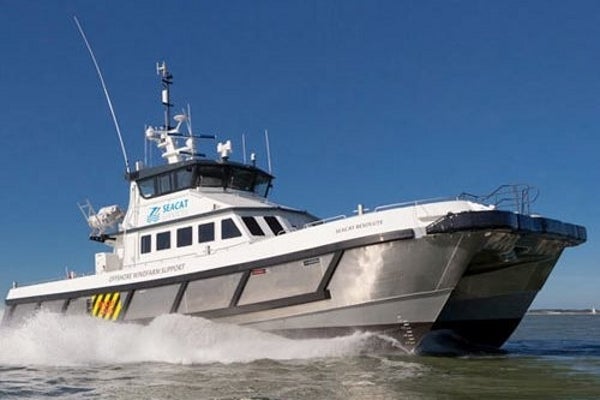 Seacat Ranger is a wind farm service vessel (WFSV) designed and built by British boat builder South Boats IOW, for Seacat Services. The vessel was launched in May and christened at a ceremony held in June.

The vessel is outfitted to transport heavy cargo, along with personnel and technicians, to offshore wind farms across Europe. The boat will be chartered to European offshore wind farm companies for service until May 2015.

The vessel was deployed at Westermost Rough Offshore Wind Farm to complete cable termination under a short-term charter agreement with Nexans Deutschland.

"The vessel is outfitted to transport heavy cargo, along with personnel and technicians, to offshore wind farms across Europe."

Based on the South Catamaran 24M design, the Seacat Ranger wind farm service vessel is built of marine-grade aluminium. The 78t gross tonnage vessel has an overall length of 25.1m, beam length of 8m and a draft of 1.2m.

The Seacat Ranger offers forward and aft deck spaces of 42m² and 30m² respectively. The vessel’s deck has the capacity to carry 20t of equipment with 15t in the forward and 5t at the aft.

Seacat Ranger is outfitted with a TMP 900XL Crane, an aluminium anchor winch (AAW)-110 from Hercules Hydraulics and a 186kg super-high holding power (SHHP) anchor with chain and line. The catamaran vessel can be optionally installed with a Palfinger PK6500M knuckle-boom deck crane.

The lightweight, highly impact absorbent, cast side vessel fendering was manufactured and supplied by Manuplas.

The vessel is further equipped with a fuel transfer system, pressure washer and crew access system. The deck also features multiple tie-down points, two 10ft container mounts in the forward and another 10ft mount at the aft to secure containers.

Accommodation and safety features of the wind farm service vessel

"Based on the South Catamaran 24M design, the Seacat Ranger wind farm service vessel is built of marine-grade aluminium."

The engines, coupled to the two ZF3050 gearboxes, drive two Rolls-Royce 56A3 stainless-steel water jets with a Rolls Royce vector control system (ROCS), enabling the catamaran vessel to sail at a sprint speed of 29k.