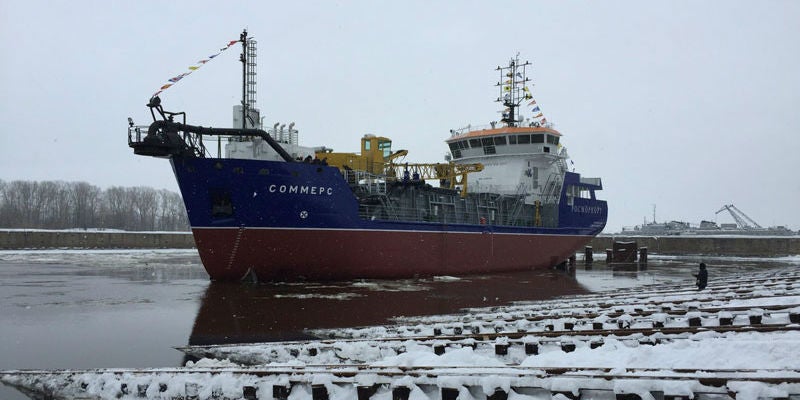 Sommers is the first of three trailing suction hopper dredgers (TSHDs) being built by Krasnoye Sormovo Shipyard in Russia, for Rosmorport. The vessel was launched in January 2015. The remaining two vessels of the class will be named Kronshlot and Kadosh respectively.

The keel laying ceremony of Sommers was held in November 2014 and the vessel is expected to be delivered by the end of 2016.

“The keel laying ceremony of Sommers was held in November 2014 and the vessel is expected to be delivered by the end of 2016.”

It will operate as a maintenance dredger at basins and access channels of a number of Russian ports, including Ust-Luga, Big Port St. Petersburg and Tuapse ports.

The design of Sommers is based on Damen’s TSHD 1000 design. The working design documentation for the vessel was prepared by the Volga-Caspian Design Bureau.

The vessel will have the capacity to store 115m³ of fuel oil, 75m³ of ballast water, 35m³ of freshwater and 10m³ of sewage. It will offer accommodation for 12 crew members.

The dredging system of the vessel will integrate a BP5045MD diesel-driven dredge pump, a 500mm trailing suction pipe, a fixed overflow system and a hopper with a capacity of 1,000m³.

The dredge pump in the engine room will be located near the suction inlet and will ensure a high mixture concentration.

The dredger can perform trailing dredging up to a depth of 20m, and can be equipped to conduct grab dredging to depths up to 20m and rainbowing up to 23m distance.

The vessel can be optionally integrated with dredging software programmes such as indication package, extended automation and dredge tracking for efficient dredging operations and easy handling of the vessel during missions.

The deck will be fitted with a hydraulically-driven anchor mooring winch with two warping heads. A hydraulic capstan with 3t pulling capacity and a knuckle boom crane capable of lifting 4.6t at 8.8m reach will also be installed.

Other optional equipment will include a grab crane with lifting capacity of 20t at 12.5m reach, a bucket with 6.5m³ capacity, a self-emptying discharge system and a degassing system.

The vessel will be equipped with an X-band navigation radar, and area A3 global maritime distress and safety system.

The propulsion system of the vessel will integrate two CAT 3512C main diesel engines of 1,118kW each.

The vessel will also feature two 2,200mm fixed pitch propellers and a two-channel 339kW bow thruster with a fixed-pitch propeller. The thruster unit will have suction provision from the bottom of the vessel for easily reaching the silted spots.

The auxiliary equipment of the vessel will include two CAT C9 175ekW generator sets and a CAT C4.4 42ekW emergency generator.

The propulsion system will ensure a speed of 11.5k at summer draught.