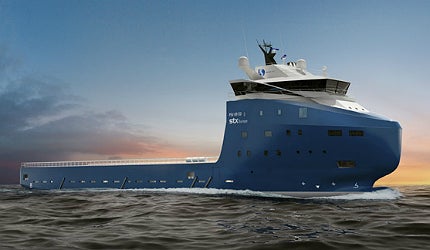 STX Europe built an environmentally friendly platform supply vessel (PSV) for Deep Sea Supply Navegação Maritima, a subsidiary of Norway-based Deep Sea Supply. Named Sea Brasil, the ship is Deep Sea Supply’s ninth vessel and is based on the PSV 09 CD. It was launched in November 2011 and was delivered in September 2012.

"Deep Sea Supply placed the order in October 2009. It was built at STX’s shipyard in Brazil."

In February 2012, BP Brasil awarded a long-term charter contract to Deep Sea Supply to operate the vessel in Brazil. The contract is for a period of three years, extendable by one year.

"In 2012, BP Brasil awarded a long-term charter contract to Deep Sea Supply to operate the vessel in Brazil."

The vessel has an overall length of 87.9m and a moulded breadth of 19m. Depth to the main deck is 8m.

The hull was specially designed to reduce resistance and improve performance in all weather conditions. Fuel consumption is reduced by minimising the additional resistance generated by waves. Flare has been reduced in the upper part of the bow for cutting through large waves.

The area above the bulb is uniquely designed to reduce resistance in small or medium waves. Underwater lines are optimised for calm seas. The vessel consumes less fuel, which reduces harmful emissions for the environment.

Electrical equipment and systems, including switchboards, integrated alarm and control systems, along with power management systems, were manufactured by STX Europe’s electro subsidiary.

The vessel comprises hybrid high-storage capacity tanks for carrying liquid cargo, including fuel oil and freshwater. It also has facilities for the storage of brine and methanol.

The ship is equipped with a diesel electric propulsion system with two frequency controlled azimuth propellers. The system is positioned optimally by integrating it with the hull shape in order to achieve maximum propeller efficiency with lower fuel consumption.

Accommodation and facilities on Sea Brasil

The ship accommodates 26 crew members. The accommodation facilities include single- and twin-bed cabins. Each cabin has a separate bathroom. Other areas include an office, lobby, health / fitness room and a medical area. The ship also includes a separate space for a deck workshop.