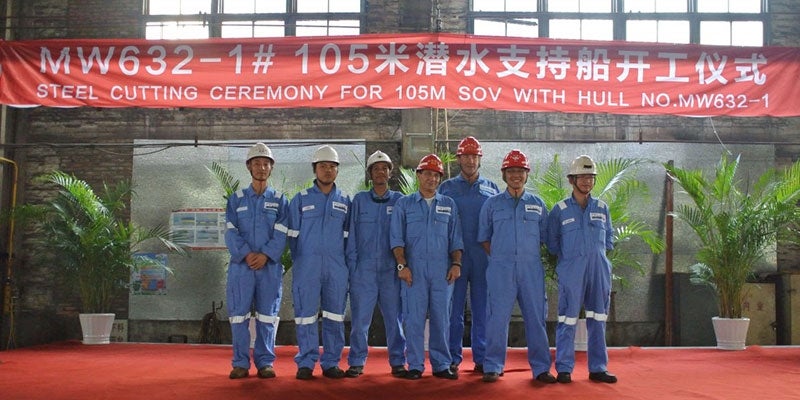 It is the first DP3 vessel designed by the company that could support a larger crane, deepwater operations and saturation diving.

"It is the first DP3 vessel designed by the company that could support a larger crane, deepwater operations and saturation diving."

Construction of the vessel began in August 2014 followed by the first steel cut in August 2015 and keel laying in December 2015. The vessel is scheduled to be delivered in the first quarter of 2017.

Mawei Shipbuilding Company has worked with selected naval architects and engineers to design and develop a new class of SOV. The vessel will have a deck space of 1,000m² with strength up to 10t/m². It will feature a 150t subsea crane and a 22.2m diameter helideck that will enable fast transfer of crew and operating staff.

It will have an overall length of 105m, moulded breadth of 24m, depth to main deck of 9m, draft of 6.5m, and length of 96.6m between perpendiculars. It will have deadweight exceeding 4,500t and will operate at a speed of 12k.

The SOV will have a capacity to accommodate approximately 120 personnel. It will feature 42 twin cabins, 25 single cabins, 11 suites with day and bed rooms, and one hospital with two beds and one treatment room. All the cabins will be fully air-conditioned and feature an attached washroom.

Equipment aboard the SOV

Tasik Tabo will be fitted with five cranes, a main offshore crane, two working cranes and two stores cranes. The main crane will be a MacGregor 150t SWL AP2C1 active heave compensated (AHC), electro hydraulic crane capable of operating in 3,000m water depth. It will have a lifting capacity of 150t at 11.5m, hook travel distance of 3,000m, whipline of 25t at 35m, and a 1.5t man riding function.

The SOV will feature an in-built, ABS Class / IMCA-compliant saturation diving system with a capacity of 15 men and a depth rating of 300m. It will feature one three-man insulated and positively buoyant bell, a PH hydraulic bell LARS, three six-man DDCs, gas storage of 19,712m³ and other equipment.

The vessel will also have an air-diving system with two stations with DDC, dedicated LARS and dive control.