Vestland Mira cruised to the North Sea just seven minutes after her naming ceremony in Balestrand, Norway.
Vestland Mira is an advanced platform supply vessel, the design of which is based on Havyard 832 L.
The 86m long Vestland Mira can sail at a maximum speed of 15kts.
The cargo deck of Vestland Mira measures 901m² in area.
Aft bridge workstation featuring advanced bridge consoles. 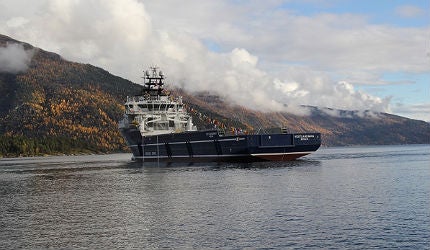 Vestland Mira is a Norwegian platform supply vessel (PSV) built by Havyard Ship Technology, a Norway-based shipbuilder, for Vestland Offshore. The vessel sailed for operations in the North Sea immediately after her naming ceremony, which was held in Balestrand in October 2012.

Havyard won the contract to build the PSV in October 2011. Construction on the vessel started in 2011 itself, with the keel laid in December 2011. The vessel’s hull, which was built by Cemre Shipyard in Turkey, was launched in April 2012.

Vestland Mira can cruise at a maximum speed of 15kts. Her service speed is 12.5kts, while economic speed is 11kts.

"Vestland Mira was designed by the design and engineering department of Havyard Group."

Vestland Mira was designed by the design and engineering department of Havyard Group. The vessel is of 832 L design, which was developed by Havyard especially for platform supply vessels. The 832 L is an upgraded version of Havyard’s 832 design. The new design calls for the creation of a PSV with enhanced crew capacity.

Significant features of the vessel include greater performance, fuel economy and lower emissions, in addition to enhanced crew and greater load capacities.

The PSV measures 86m in length and 17.6m in width. Length between perpendiculars is 77.4m, while maximum draught is 6.4m.

The vessel is outfitted for the accommodation of up to 25 persons in spacious cabins. In all, there are nine one-man cabins, four two-men cabins, and two four-men cabins. All cabins are provided with bathrooms.

Other facilities include a hospital, a fully equipped office, two day rooms, and a gymnasium.

Vestland Mira is outfitted with a diesel electric propulsion system delivered by Norwegian Electric Systems (NES). It is driven by four CAT 3512 main engines rated at 1,560kW each. There is also a Caterpillar emergency generator of 100kW capacity.

Propulsion is provided by twin Schottel propulsion thrusters, each of 1,600kW. There are three Brunvoll CPP side thrusters, all fitted forward and rated at 880kW each.