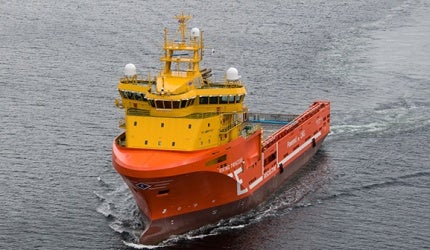 Viking Princess is a liquefied natural gas (LNG)-driven multipurpose offshore vessel owned by Eidesvik Supply and operated by Eidesvik. She was delivered in September 2012 and is the sister ship to Viking Prince, which started sailing in March 2012.

Norwegian shipbuilder Kleven Maritime won a $77.28m (NOK440m) contract by Eidesvik back in July 2010 to build the two sister ships. The keel of the second vessel, Viking Princess, was laid in October 2011 in Kleven Maritime’s yard at Ulsteinvik, Ulstein, Norway. The vessel’s hull was launched in April 2012.

Viking Princess was officially christened by Mette-Marit, the Crown Princess of Norway, on 14 September 2012 in Bergen, Hordaland, Norway.

Viking Princess was officially christened by Mette-Marit, the Crown Princess of Norway, on 14 September 2012 in Bergen, Hordaland, Norway.

The vessel is of VS 489 Gas PSV design developed by Wärtsilä Ship Design and is built to DNV class 1A1 ICE-C Supply Vessel, Standby Vessel(S), Oil Rec, Gas Fuelled, and other notations.

The vessel’s dual fuel engines allow her to operate on gas as well as heavy fuel oil (HFO) and marine diesel oil (MDO). It is only during LNG bunkering that the vessel uses diesel. The use of LNG will reduce NOx and CO2 emissions by 85% and 25% respectively.

Viking Princess has a gross tonnage of 5,014t and a dead weight of 5,800t. Her overall length, moulded breadth and summer draught are 89.6m, 21m and 7.6m respectively. Length between perpendiculars is 79.2m, while depth to main deck is 9.6m. Cargo deck area of the vessel is 1,050m2 and the height of the cargo rail is 4m.

Accommodation and facilities onboard the Viking Princess

The PSV can provide permanent accommodation for a total of 28 persons. It has four cabin states, 12 one-man cabins and six two-man cabins. All of them are provided with toilet and shower facilities.

Facilities on-board include a no-smokers room, smokers room, laundry and gymnasium. The vessel also has an office and a hospital.

Tank washing is done with hot and cold water. Tanks containing mud, brine and base oil are washed with chemical blended water. All types of liquid cargo on-board the vessel are handled by separate pumps and piping system.

Viking Princess is fitted with two Adria tugger winches and two Adria mooring winches. An Adria anchor / mooring winch is installed forward. There are also two harbour mobile cranes (HMCs), each of which can lift 5t at a 15m outreach.

The PSV can provide permanent accommodation for a total of 28 persons.

Viking Princess is equipped with Wärtsilä’s gas electric propulsion system featuring the low loss voncept (LLC). Instead of four main engines, the vessel is outfitted with two large and two small dual-fuel engines. The larger ones are six-cylinder in-line 34DF engines, each rated at 2,610kW. The smaller ones are six-cylinder 20DF engines, each rated at 1,056kW. Each of them is driven by Alconza main generators (2 x 2,510kW and 2 x1,014kW).

Emergency generator sets include a Volvo Penta D12 engine of 339kW capacity and a Stamford generator of 375kVA.

Propulsion is provided by two Steerprop Sp 35 CRP azimuth propellers, each of 2,450kW. A set of two Brunvoll bow thrusters, each of 1,000kW, and an azimuth thruster of 880kW allow the vessel to manoeuvre smoothly.