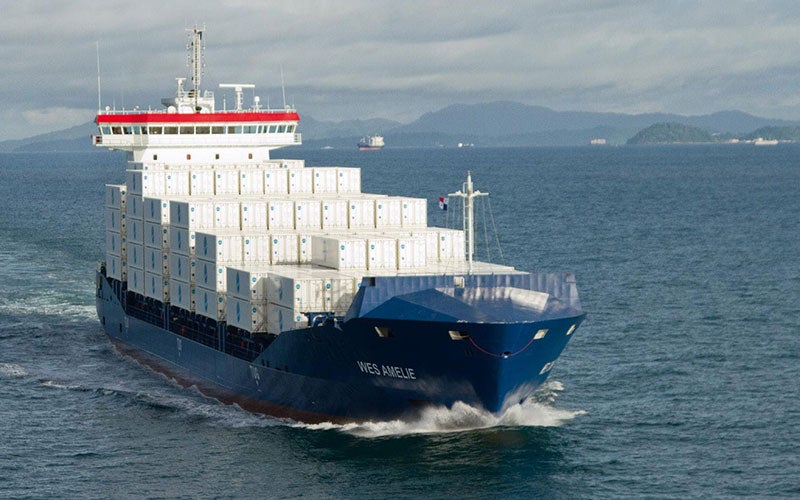 Wes Amelie is the ship first of its kind in the world to be transformed into a liquefied natural gas (LNG) powered vessel.

The Federal Ministry of Transport and Digital Infrastructure released a grant for the vessel’s retrofit in October 2015 through the Mobility and Fuel Strategy programme, which was launched to promote maritime use of LNG as an environment-friendly fuel.

MAN Diesel & Turbo performed the conversion at its German shipyard in the fourth quarter of 2016.

The completely converted LNG powered vessel was subsequently launched in August 2017 and the conversion project was formally concluded in September 2017.

It also achieved a significant reduction in particulate and CO2 emissions and will be compliant with future stringent tier III emissions set by the IMO.

Wes Amelie is a modern feeder vessel operating in the North and Baltic Seas that was originally launched in 2011.

Significant efforts were made to achieve a noticeable multiplier effect through the selection of the vessel for conversion, which is intended to benefit follow-up refit projects.

Other factors considered during the selection process included the scalability of engineering services, development costs and costs of follow-up projects.

Wes Amelie has a toal of 23 sister ships, including 16 that are structurally identical, making it easy to execute follow-up projects after the first conversion.

The vessel was built according to a German-Dutch design and has an overall length of 151.72m and beam of 23.4m.

The vessel has a maximum service speed of 18.5k and an economical speed of 13k.

The ship has been classified by Bureau Veritas (BV) as BV + 1 HULL AND MACH INWATER SURVEY AUT – UMS ICE 1A CONTAINERSHIP (EQUAL FINISH-SWEDISH).

“Wes Amelie is the ship first of its kind in the world to be transformed into a liquefied natural gas (LNG) powered vessel.”

Wes Amelie was originally fitted with a MAN 8L48/60B main diesel engine with a continuous rating of 9,000kW at 500rpm, which was  later replaced with a multi-fuel, four-stroke MAN 51/60DF engine.

Engineering manufacturer MAN Diesel & Turbo collaborated with gas specialist TGE Marine Engineering to assist in the engine conversion, which included the reconstruction of the main engine plant and installation of a new LNG tank.

The cylinder bore was also increased from 48cm to 51cm and the pilot oil system for gas operation was completely reconstructed.

New valve cams and a turbocharger rotor assembly were added to allow for a change of ignition timing for the new engine.

The vessel’s engine sensors were also converted and new instruments were installed to optimise the performance of the new engine.

The necessary calculations and blueprints for the conversion and installation initiative were provided by engineering company SMB Naval Architects & Consultants.

The transition to low-emission propulsion systems is gaining importance in the shipping industry as a result of the 2015 Exhaust Emission Directive, which was released by the IMO for the Emission Controlled Areas (ECAs) of the North and Baltic Seas.

Wessels Reederei, along with its partners MAN Diesel & Turbo and TGE Marine Gas Engineering, have been working on a possible conversion of 1,000TEU container ships from heavy oil to low-emission LNG operation since 2013.

The company has also studied the installation of an emission control system (scrubber), which would allow the use of heavy fuel oil in ECA zones.

LNG operation is still preferred as an ideal solution, however, as scrubbers offer poor environmental performance compared to LNG propulsion.