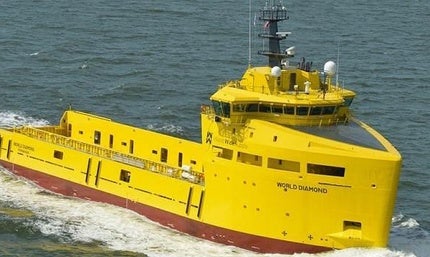 World Diamond is the first of six mid-sized platform supply vessels (PSVs) in Damen’s PSV 3300 series. The vessel was delivered to its owner, World Wide Supply, in June 2013.

The vessels in the 3300 series are based on Damen’s E3 principles (environmentally friendly, efficient in operation and economically viable), and feature a slender hull. The owner initially ordered for four vessels in the series, in December 2011. Two more vessels were ordered in February 2012.

The second PSV 3300 vessel, World Peridot, was delivered to World Wide Supply in August 2013. The third and fourth vessels, World Pearl and World Emerald, were delivered in October and November 2013 respectively.

The first four vessels will serve Petrobras in its offshore operations in Brazil. The last two vessels, World Opal and World Sapphire, are expected to operate in the North Sea.

Dimensions and classifications of the platform supply vessel

"The last two vessels, World Opal and World Sapphire, are expected to operate in the North Sea."

The mid-sized platform supply vessel is capable of accommodating 16 crew members and six passengers. The accommodation facilities are provided with internet, telephone, and satellite TV connections.

The vessel also features fire fighting equipment with a capacity to spray 2,400m³ of water per hour, and is equipped with a ballast water treatment system.

The navigation equipments aboard the Blue Diamond include an ECDIS (electronic chart display and information system), and X-band and S-band radars.

The communication equipments aboard the vessel are based on GMDSS A3 requirements.

The other ancillary facilities aboard the PSV include a waste heat recovery system for each generator and exhaust gas cleaning system to cut down carbon dioxide emissions.

The vessel’s propulsion system will enable it to sail at a speed of 13.7kt.