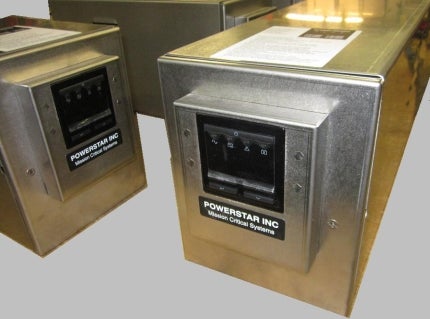 Powerstar UPS has been in business since 1993, with all its manufacturing carried out in the US.

Powerstar manufacturers compact and cost-effective 330W-425W brick-shaped UPS (PS502 line) units. These low-cost systems can be used to power and protect computers and printers, or other low-power devices. The maintenance / repair period can be doubled with a ten-year battery pack.

The PS502 series uses a USB connection to notify the computer of any UPS alerts, and when to begin shutdown upon loss of power. The PS502-750 (525W output capacity) also has a special feature, the ‘green mode master port’. The port detects when no current is being supplied, and then turns off any other controlled ports. For example, when the PC is shut-down, the printer and monitor also turn-off, conserving power. See the catalogue link below for more details.

Shipboard versions of 120V COTS rack-mounts from 0.7 to 3KVA

The PS6000 series: For its PS6000rm (APC™) product range, Powerstar uses the APC™ SMT series UPS. Offering an efficiency of 98% at full load, these units generate less heat in the rack, and can incorporate ethernet monitoring and communication. The units range in power from 700W-2,700W, have a 3.5in height dimension, and are supplied with a rail kit for four-post rack mounting. Upgrades are also available for a premium battery option, with an operating range of -20°C to 50°C, and expected life-cycle of ten years.

All Powerstar rack-mount units come with a rail kit for installation into a four-post 19in equipment rack. These rails are adjustable for depth. Ten year long-life batteries are optional. See the catalogue link below for details. Connectors may be altered per your request. Conformal coatings may be added if required.

These three rack unit tall units contain the isolation transformer internally. The cabinet is specially made to house the transformer for excellent electrical isolation, good for both sailor safety and electrical noise immunity. These are popular for naval customers and are available for the commercial users as well.

The PS3000 series: Powerstar uses Liebert from Emerson Products for its online double conversion models, offering the ability to add additional battery trays for extended runtimes. The models all have emergency power-off connections (EPO), so power-flow can be cut instantly when connected to fire alarms, panic buttons, or smoke detectors.

The PS6000 XL series: The PS6000 XL range uses the APC™ SMX series. They have the same 3.5in height dimension as the PS6000rm (APC™) SMT series, but with a bigger charger to handle additional battery cabinets. A higher density battery packaging design is used so longer runtimes than the standard SMT series can be offered. The XL series now includes a front mounted two line alpha-numeric metering readout to quickly diagnose the operational status. This XL Series offers optimum efficiency levels,

Either of these extended runtime models may add on ‘BP’ battery trays that are 2u in height and are supplied with mounting rails for four post racks. Upgrades are also available for a premium battery option, with an operating range of -20°C to 50°C, and expected life-cycle of ten years.

These short tower-style UPS are listed with the Catalogue link below. The hull-mount series is offered with bolt-down / weld-down steel mounting platforms for secure fastening, while maintaining easy removal. Also available are five-year, ten-year, and 12-year eXtreme rugged battery packs.
The mounting platforms have a steel base, which can be bolted or welded to the deck, with bolt-down steel straps surrounding the supply. To lower costs, these units are also offered with original equipment manufacturer cabinets, if meeting high-shock tests is not required.

Powerstar offers a few units with unusual shape layouts to fit tight spaces such as yacht equipment bays or even submarines.