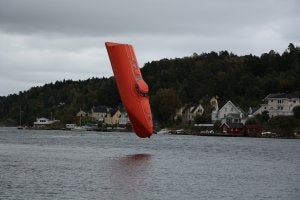 Norsafe has received orders for 400 million NOK over the course of one month, reinforcing its role as the world’s leading manufacturer and supplier of maritime lifesaving systems.

During October 2012 the sales department signed contracts for a value greater than NOK 400 million, thereby increasing the order backlog to a new record height of 1.35 billion NOK.

"It is Norsafe’s newly developed GES50 MKIII freefall lifeboat which accounts for the bulk of these orders," says CEO Geir Skaala, adding that the international demand for this product is fantastic.

GES50 MKIII (gravity escape system) is certified according to the DNV-OS-E406, the world’s strictest requirements for freefall lifesaving systems, applicable on the Norwegian continental shelf from 2015. "The boat is the first model in a series of three newly developed freefall lifeboats in compliance with these new regulations," says Geir Skaala.

GES50 MKIII is 50ft long, has a capacity for 70 persons, and is certified for drop heights of up to 47m. The market’s most advanced freefall lifeboat has achieved these tremendous results after having undergone a series of extreme tests, including a drop-test from 61.53m.

The customers using the new lifeboats are oil companies, rig owners and operators who are committed to safety, often operating under the toughest possible weather conditions found in the North Sea, Barents Sea and the North Atlantic. Among the customers are Songa Offshore SE (Statoil), Seadrill Limited, Floatel International and Axis Offshore.

Norsafe Group has its headquarters at Tromøy outside Arendal and today counts 850 employees. The company has a worldwide involvement that includes production, sales, delivery and service of lifesaving equipment for ships and to the offshore industry.

The company has its own production and sales / service companies in Norway, China, Greece, Mexico, Singapore, South Korea, USA, Japan, Brazil and the Netherlands. In addition, Norsafe Group has a network of 45 service stations spread across all continents. Norsafe is continually growing, and new daughter companies and service stations are in the process of being planned / developed.

Norsafe is First to Market with Groundbreaking Maintenance Agreements

Norsafe, global leader in marine life-saving equipment, is the first supplier in its sector to...

Maxima-120 TELB – Built for the Future

The Norsafe Maxima-120 is the biggest totally enclosed lifeboat (TELB) in the history of Norsafe....

The GES 21 is a brand new lifeboat from Norsafe especially designed for ships. It...