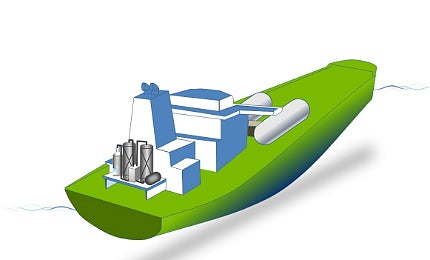 As the world continues to face up to the effects of climate change and greenhouse gas emissions, the global shipping industry has been turning its attention to its own contribution to the problem. And a sizeable contribution it is too, with today’s maritime CO2 emissions of around a billion tonnes a year accounting for three percent of the global emissions total. Emissions from marine transport are also predicted to rise to between two and three billion tonnes by 2050.

“DNV’s project was searching for a way to take the land-based CCS process and adapt it.”

With shipping volumes expanding in step with growing global trade demand, the International Maritime Organization (IMO) responded to the emissions challenge in July 2011 with the creation of the world’s first mandatory, global greenhouse gas reduction scheme for an entire industry sector.

The expanded MARPOL Annex VI is a sure sign that the winds are changing for marine carbon emissions, with national and international bodies such as the European Union starting to tighten their own emissions limits. The industry’s focus on emissions reduction, on top of rising fuel costs, is spurring a new wave of carbon-efficient marine propulsion technologies and initiatives, including a steady shift away from heavy fuel oil and towards more efficient liquefied natural gas (LNG).

While today’s maritime efficiency drives predominantly centre on incremental improvements that are feasible with present-day technologies and financial constraints, a few projects are looking to the future with more radical ideas that could shape eco-friendly shipping in decades to come.

One such project was recently completed by Norway’s innovative classification society and risk management specialist Det Norske Veritas (DNV). The conceptual project, which was carried out in collaboration with UK modelling software company Process Systems Enterprise (PSE) and led by DNV’s head of research and innovation for Greece, Dr. Nikolaos Kakalis, aimed to gauge the theoretical feasibility of implementing carbon capture and storage (CCS) technology onboard large vessels.

Onboard CCS: the concept

Carbon capture and storage is a complex, emerging process currently being put through its paces at various pilot power plants around the world. In its originally intended form, the basic CCS process involves the separation of CO2 from a fossil fuel power station’s post-combustion flue gas, removing its emission from the power generation cycle and transmitting it for storage or industrial use.

Given that CCS is still a relatively unproven concept, even in the large onshore power plants it was designed for, the idea of transplanting this complex system to the constantly moving, space-constrained confines of a vessel seems ambitious in the extreme. In essence, DNV’s project was searching for a way to take the land-based CCS process and adapt it to separate the CO2 from a vessel’s main engine exhaust and store it for offloading at a port.

The advanced and hugely expensive implications of maritime CCS meant that DNV’s feasibility project was always going to be a theoretical exercise, involving modelling the hypothetical design and operation of a ship-based CCS concept, rather than attempting to develop a physical prototype. Even so, Dr Kakalis notes that when DNV and PSE originally applied for funding from the European Commission for the project, the reaction was emphatic. “We got [funding] without any negotiation because the actual concept is very radical and innovative,” he says.

Designing a feasible onboard CCS system

DNV’s research team was aware of the major challenges of the project from the outset. The project was simplified somewhat by taking an existing onshore carbon capture unit design and adapting it for maritime use, as well as the choice of a very large crude carrier (VLCC) as the hypothetical host, because of its size and relative abundance of deck space. Nevertheless, a number of conceptual challenges were unavoidable, as Kakalis explains.

“You limit your harm to the environment, and you can transform these emissions into a commodity.”

“The big challenges are that you have a limited amount of space, a limited availability of resources, and of course the constant movement of the vessel,” he says. “All these together create a very strong requirement for extra safety and risk management. That’s where DNV comes into the game, because we are an expert when it comes to safety and risk management in shipping.”

Fortunately, safety concerns about the storage of liquefied CO2 on a moving vessel turned out to be covered by DNV’s existing rules and standards for gas carriers. Actually fitting the CCS system – mainly composed of two towers for CO2 separation and liquefaction, as well as cryogenic tanks for storage – onto a standard VLCC design represented the project’s primary design task.

“What we managed to do was get a standard design of a chemical absorption carbon capture unit and scale it down, not only to fit into the constrained space but also to adapt it to the smaller amounts of CO2 that are emitted in comparison to a power plant onshore,” says Kakalis. “The first question was where to place the carbon capture unit – the absorption unit and the regeneration column. In this particular concept, we placed them aft of the funnel, so behind the accommodation space of the vessel, on a raised deck. This, according to our calculations, is a good option as there is no obstruction to the rest of the machinery space or any other equipment or facilities.

“The other question is where do you store the liquefied CO2? We used a couple of cryogenic tanks that are placed on the deck. This is a concept that DNV has used before in another vessel concept called DNV Triality, which is similar to CO2 but for LNG tanks. So placing the CO2 tanks on the deck and not having them inside the actual hull means that you don’t compromise the carrying capacity of the vessel. You don’t lose cargo space.”

Benefits and obstacles: the reality of onboard CCS

“Actually fitting the CCS system onto a standard VLCC design was the project’s primary design task.”

So DNV’s finalised concept, published in February 2013, did manage to prove the fundamental viability of maritime CCS, at least on paper. Indeed, the researchers’ analysis of the system’s potential benefits yielded some impressive results – onboard CCS would reportedly be capable of reducing ship CO2 emissions by up to 65%, which for a VLCC would be the equivalent of taking more than 70,000 tonnes of CO2 out of the atmosphere every year.

Perhaps the most exciting advantage of the CCS concept is what could be done with the CO2 after it is successfully separated and stored. Given the expanding industrial uses for CO2, ship operators would be able to transform their waste exhaust into a commodity to tap into profitable new sectors. For example, liquid CO2 could be transmitted to the oil and gas industry, where it is used as an injected medium in enhanced oil recovery operations for ageing fields.

The option that offers the neatest environmental symmetry would be to sell the CO2 to the increasingly large-scale producers of eco-friendly, algae-based biofuels, the production of which uses CO2 as a catalyst. So the harmful exhaust from vessels could theoretically be recycled as a component in the development of green fuel for ships or other vehicles.

“I think this is the most innovative part of this project, and the whole idea,” says Kakalis. “The fact that you emit less, so you limit your harm to the environment, and at the same time, you can transform these harmful emissions into something that is useful and that can be traded, can become a commodity.” 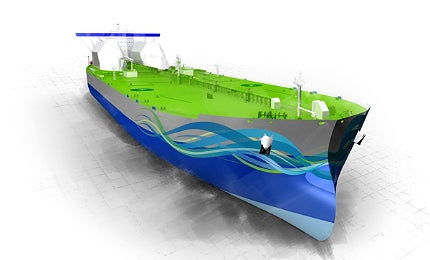 But for all the system’s benefits, and however theoretically possible it might be, DNV’s CCS concept is still confined to the drawing board. Bringing carbon capture into the real world requires the jumping of a major obstacle – the huge upfront investment that would be required to develop a prototype, and the uncertainty that reliable markets exist to buy the CO2 by-product and offset that investment.

“It all comes down to the investment,” Kakalis says. “Someone will need to go through the building of a prototype unit, find out more about the real cost and then see what could be a break-even selling price for the CO2. From what we know of onshore CCS, it costs a lot. This concept will require something like a more integrated value chain, so that somebody could present some contracts selling this CO2 to the oil and gas industries or to big companies that are producing algae-based biofuel. So someone really needs to have forward contracts to make this a reality.”

Against the backdrop of a shipping industry that is still suffering the effects of the global downturn and soaring fuel prices, cautious shipowners clearly need time to catch up with an idea as radical as onboard CCS.

But DNV’s project sets a solid foundation for the further development of the concept in the future. And as Kakalis notes, the very existence of a potentially revolutionary concept such as this does engender a little optimism for the future, both financial and environmental. “We are in difficult times for shipping, mainly due to the very high fuel prices and the pressure of [environmental] regulations. It’s good to see that technology could bring some answers to the table.”