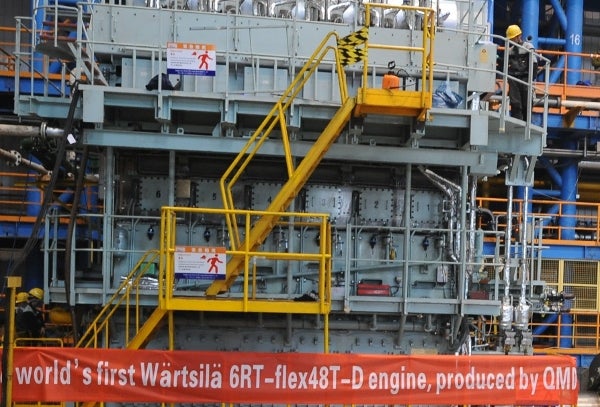 Wartsila RT-flex48T is the result of further development of its existing RTA48T engine, with which the company completes its work in adapting its range of low-speed RT-flex engines for all bore sizes.

The new engine is designed to power small bulk and tanker vessels, including the Handysize and Handymax range, and is also available in other cylinder configurations.

Inclusion of the RT-flex common-rail technology in the RTA48T engine enables the engine to have an electronically controlled fuel injection and exhaust valve activation to reduce emissions and fuel consumption.

Wartsila president of Switzerland and VP of product centre 2-stroke Martin Wernli said the company is pleased to add the new RT-flex48T engine to its portfolio of common-rail low-speed engines.

“We now have this industry-leading technology available for all bore sizes in our current low-speed engine portfolio,” Wernli said.

According to the company, the new engine features precise control of fuel injection and the high injection pressure at all speeds, which together give steady running.

The rail unit and supply unit were taken from the RT-flex50 type engine, to further develop the common rail version of the RTA48T engine.

Last month in November, the company had extended its licensing agreement with its Korean partner Doosan Engine for a further ten years in order to build Wartsila low-speed engines.

As part of the deal, the licensee is authorised to build and sell Wartsila low-speed marine diesel engines within its specified territory.

The company said a full range of Wartsila RTA, RT-flex and X-series marine engines are included under the deal.

Caption: The new RT-flex48T is the result of further development of the company’s existing RTA48T engine.