The UK is committed to maintaining its position as a global trade hub post-Brexit despite the challenges facing the maritime industry, the minister for investment at the Department for International Trade (DiT), Graham Stuart said speaking at London International Shipping Week (LISW) today.

In his keynote speech at the conference Stuart addressed a number of issues concerning the shipping industry, including the UK’s position as an international trade hub and the importance of creating sustainable relationships with other countries to boost free trade after the UK leaves the EU.

“When we leave the EU, the UK will be faced with a one to one generation opportunity to transform ourselves into a truly global standard-bearer for free trade,” he said.

Speaking only hours after the government released its ‘yellowhammer plan’ in the event of a no-deal Brexit, Stuart said that given the political position the UK is in at the moment, the financial dependence it has on shipping is “threatened.” 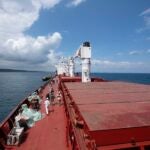 News
More than 400,000 metric tons of grains shipped out of Ukraine

However, he urged the maritime industry to “be audacious” so that after the UK leaves the EU, “the maritime sector will become ever more central to the UK’s economic growth and in securing our place as a leading free trading power in a fast-changing world”.

“Shipping has been and will continue to be the lifeblood of the British economy,” he added.

“Generations of British seafarers have helped forge crucial trade links that have placed the UK at the very heart of global commerce and world affairs, benefiting not just us in these islands, but our friends and partners worldwide.”

Being responsible for 95% of the trade in the UK, the shipping industry contributes £14.5bn to the British economy and employs more than 186,000 people.

Stuart was bullish about the UK’s future prospects in global trade even after 31 October: “We are, I believe, well placed to succeed.

“We are on the cusp of a golden era of trade, in which we will build even closer and more lucrative new trade ties with fast-expanding markets worldwide, which are realising this huge potential and the opportunity that it represents.

“It’s vital that we provide a maritime industry with the support it needs to keep the arteries of British trade flowing smoothly,” he said.

Stuart also addressed rising political frictions which are heavily impacting the industry and its international trade relationships. “On both, the left and right politics, we see people challenging, and threatening to tear down the very global architecture, which has lifted more people out of poverty than has ever happened before which is why the UK as an independent nation will champion the multilateral agreement,” Stuart affirmed.

He also stressed that while the UK will strive to keep up with the consequences of Brexit, it will focus on capitalising on relations with markets other than the EU. “We’re working to ensure that our world-class maritime industry is ready to trade and to seize the opportunities that Brexit will bring.

“The DiT is working hard with export campaigns and countries such as China and Brazil to showcase what our firms have to offer emerging economic powers. In addition, we will establish a network of frequencies to drive growth, to create high skilled jobs and ensure seaports and airports around the UK are able to take advantages of the opportunities Brexit breaks. This will provide a much needed economic boost for some of our most deprived coastal communities,” he noted.

Stuart said that the government will continue to support the industry “to feed markets hungry for British goods.”

Stuart also confirmed that investing in technology will be a focus for the UK to ensure its strong position in the shipping industry. “The government will first seek to support the capture of greater market shares and key technologies to improve the environment and performance of shipping globally.

“Promoting the UK’s capabilities in maritime science will seek to transform the sector into a world leader in digital technologies. I think we have a strong base but we need to go further and faster not least, to meet the challenges,” he added.

To ensure the UK continues to leverage on global trade, Stuart said the DiT will be strengthening relationships with Africa with the UK aiming to be the largest G7 investor. He said it was to establish the UK as a global trade ecosystem as well as grow the economy of Africa. “When you create a more prosperous world, you also create a more prosperous United Kingdom,” he said.