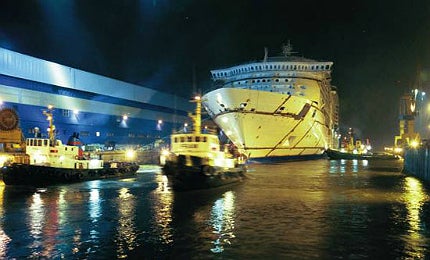 Adventure of the Seas is the third of five Voyager-Class cruise ships that have been built for the Royal Caribbean Cruise Line. It was constructed by Kvaerner Masa-Yards at the Turku New Shipyard in Finland. The other vessels were the Voyager of the Seas, which was delivered in October 1999, and the Explorer of the Seas, which was delivered in September 2000. The $500m ship completed its maiden voyage in November 2001. It was refurbished in 2009.

Design, layout, dimensions and facilities of Adventure of the Seas

The hotel facilities include 1,879 staterooms. The main passenger cabins are located on decks two and three. The staterooms vary in size from 15m² to 45m². Of these staterooms, 939 have a sea view, and 707 have balconies. Every stateroom has a mini-bar and a 19in TV. The vast majority of the outside staterooms are fitted with a veranda. There are 15,500 seats for passengers, of which 5,300 seats are in cabins and 2,000 are seats on outer decks.

Dining and entertainment onboard Adventure of the Seas

The Adventure of the Seas has a variety of dining options, including a spectacular three-level main dining room with three separate and distinct themed dining areas.

"Adventure of the Seas is the third of five Voyager-Class cruise ships that have been built for the Royal Caribbean Cruise Line."

The ship also has a Windjammer Cafe and a Johnny Rockets Restaurant. In addition to Studio B, the 1,350-seat theatre, which has 25,000W of power for sound equipment and 18,000W for lighting equipment, there is a 900-seat arena for a variety of shows, including ice shows and ice-skating.

Sports facilities include an outdoor sports deck, complete with golf course, driving range and golf simulators, as well as a roller blade track and a full-sized sports court for basketball, paddleball and volleyball. There is also a rock-climbing wall. There are large facilities for children and teens and large conference facilities. The vessel also contains a wedding chapel.

The ship also has 9,623ft2 Casino Royal bar. The casino has 291 slots and 16 tables. The ship has 15 bars, clubs and lounges in total. There is also an unparalleled amount of space for the crew with a recreation deck, six whirlpools, three dining facilities, a gym and a disco.

The power facilities are based on a diesel-electric power station. It has six Wärtsilä 12V46C engines, giving a total power of 75,600kW. The total propulsion power is 42,000kW.

The propulsion machinery consists of three azimuthing electric 14MW Azipod podded electric propulsion units. The two units on the sides are fully azimuthing, whereas the one at the centreline is a fixed unit.

It incorporates an electric AC motor, located inside the propeller pod, which directly drives a fixed-pitch propeller. There are four 3MW tunnel thrusters in the bow. Dynamic positioning systems ensure no anchoring is needed in sensitive coral areas.

Future upgrades of the cruise liner

The ship has a vitality spa, four pools, and a fitness centre, which conducts yoga and Tai Chi classes.

The ship will receive upgrades under Royal Advantage Programme in 2014. The upgrade programme will provide new facilities, including an outdoor movie screen, digital signage, ship-wide Wi-Fi and new Concierge and Diamond lounges.

The Cafe Promenade and Portofino restaurants will also be refurbished on the Park Cafe and Giovanni’s Table concepts.

Allure of the Seas – Cruise Ship, United States of America

MS Allure of the Seas is the largest cruise ship in the world. The Oasis Class cruise ship is owned by Royal Caribbean International. Delivered in October 2010, the vessel is the sister ship of passenger ship Oasis of the Seas.

Oasis of the Seas is the first of the Oasis Class (formerly the Genesis Class or project Genesis) luxury cruise ships in the Royal Caribbean International fleet.