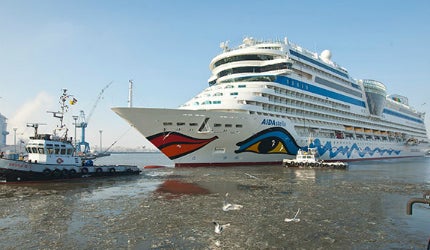 AIDAstella is a cruise ship built by AIDA Cruises of Germany. The vessel was christened at Rostock-Warnemunde on 16 March 2013. It is the last ship out of the seven Sphinx-series ships ordered by AIDA from Meyer Werft and the tenth ship to join AIDA’s fleet. It is the sister ship to AIDAblu, AIDAsol and AIDAmar.

AIDAstella left the building dock and was transferred to the harbour of Papenburg yards for tests in January 2013. The ship sailed for its conveyance trip from the EMS River to Emden Harbour and completed its sea trials in the North Sea in February 2013.

AIDAstella sailed on its maiden voyage through northern Europe (Warnemuende to inter alia Denmark, Norway, England and France) in March 2013.

"AIDAstella’s interiors feature Nordic and Scandinavian designs with the major attraction set to be the real birch forest onboard the ship."

Similar to its sister-ships, AIDAstella complies with the informal club resort cruise concept of AIDA Cruises, which attracts younger and more active guests from Germany.

AIDAstella’s interiors feature Nordic and Scandinavian designs with the major attraction being a real birch forest onboard the ship. The interior design was done by Partner Ship Design. The company was involved in providing the general arrangement and profile design for the ship and carried out the supervision and interior designing works for the cabins and public areas.

The interiors of cruise ship are illuminated with 9,000 halogen Eco lamps and 1,200m of flexible LED modules provided by Osram.
The cruise ship has an overall length of 253.3m and a width of 32.2m. The displacement of the ship is 71,300t.

Staterooms and facilities onboard AIDAstella

AIDAstella is capable of accommodating 2,194 passengers in 1,097 cabins. It features 722 suites and outside cabins with balconies. Like its sister ships, it also comprises 14 decks. The ship is served by 662 crew members.

Scandinavian designs are incorporated into 39 cabins with direct access to a wellness area. The wellness area, built up in 2,602m2, is fitted with sliding glass roofs and birch trees, providing a Nordic aesthetic. The wellness oasis spa and sports area are located on deck 14. The shadow roofs for deck 14 were fitted by Hahlbrock Feserverstarkte Kunststoffe.

"The cruise ship is also equipped with a brewery for brewing beer from purified sea water."

Dining facilities onboard the cruise ship comprise seven restaurants, covering an area of 4,000m3, and 12 bars. The cruise ship is also equipped with a brewery for brewing beer from purified sea water, with its dispensing tanks having a storage capacity of five barrels.

Entertainment facilities onboard AIDAstella include a new lounge with a 65in theatre screen on deck 11.

AIDAsol is the fifth of seven Sphinx Class cruise ships being built by Meyer Werft for the German cruise operator AIDA Cruises.

The ship is propelled by two brass propellers comprising five blades with a diameter of 5.2m and weighing 12,800kg each. The 35m-long drive shafts are powered by two electric motors.

The propulsion system of the cruise ship enables it to cruise at a speed of 23kt.