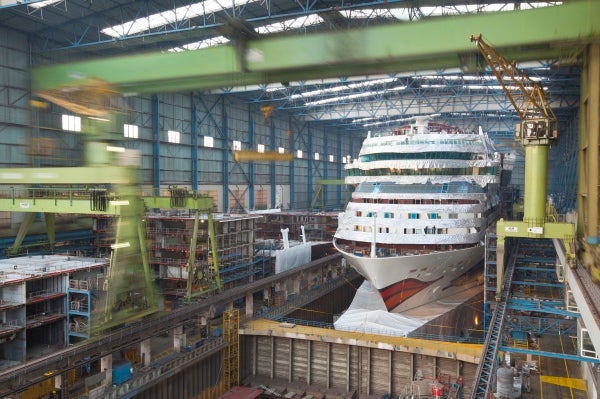 AIDA Cruises introduced a new cruise ship, AIDAmar, in May 2012. She is the sixth of the seven Sphinx-series ships and ninth in the AIDA fleet.

The cruise ship was constructed at Meyer Werft’s shipyard in Papenburg. The ship was launched in May 2012 during the 823rd Hamburg Port Anniversary celebration.

The new cruise ship joined its sister ships AIDAluna, AIDAblu and AIDAsol. For the first time in the history, these three AIDA club ships were christened together.

AIDAmar headed for its maiden voyage in June 2012.

In December 2007, the Carnival Corporation placed a €765m contract with Meyer Werft to build two cruise ships, AIDAsol and AIDAmar, for its AIDA Cruises brand. AIDAsol was delivered in March 2011.Design of AIDAmar

Like her sister-ships, AIDAmar was built around the informal club resort cruise concept of AIDA Cruises.

The ship is designed to attract younger and more active guests from Germany.

"She is the sixth of the seven Sphinx-series ships and ninth in the AIDA fleet."

The ship can accommodate 2,194 passengers in 1,097 double cabins, including 722 outside rooms.

Dining facilities onboard include seven restaurants and 12 bars. The restaurants occupy an area of 4,323m².

The onboard brewery makes fresh beers from purified sea water. The Anytime Bar, the Ocean Bar and the Pool Bar on deck 12 serve a variety of drinks for the guests.

The Cinemare movie theatre on deck 11 shows the latest movies in 4D. The area of sun deck is 6,620m².

Propulsion of the Sphinx-series cruise ship

AIDAmar is powered by four nine-cylinder MAK diesel engines. Each engine weighs about 127t and delivers a power output of 9,000kW.

The diesel-electric propulsion system aboard the AIDAmar reduces emission levels in the rated load range when diesel engines are running.

After the maiden voyage, AIDAmar sailed on a 14-day Norwegian Fjords voyage from Hamburg. The ship will operate on a series of cruises to Western Europe and Iceland.

The PlanetSolar is a solar-powered vessel built by Knierim Yachtbau, in Kiel, Germany for Switzerland-based PlanetSolar.