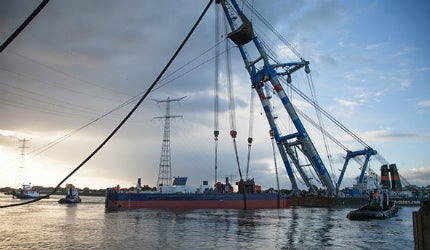 Alberto Aleman Zubieta is the latest backhoe dredger designed, constructed and delivered by IHC Merwede. Autoridad del Canal de Panama (ACP), the operator of the Panama Canal, took ownership of the vessel in May 2013.

The vessel is touted as the largest of its kind in the world and was delivered following a trial period of 30 days on the Panama Canal.

The contract for the design, construction and delivery of the vessel was signed by its previous owner with IHC Global Production in April 2011. Its keel was laid in December 2011 and the construction was launched at the shipyard of NMC in Nieuw-Lekkerland in September 2012.

Details of the vessel

"The vessel is touted as the largest of its kind in the world."

The backhoe dredger measures 62.2m in length and 23m in breadth. It has a depth of 5.1m and draught of 3.2m. It has a maximum dredging depth of 19.5m with a backhoe bucket of 31.5m³, is installed with a maximum power capacity of 3,000kW, and provides daytime accommodation for ten people.

The vessel is also equipped with five box coolers with anti-fouling systems.

"The project has generated approximately 27,000 direct jobs so far."

The vessel’s five box coolers incorporate anti-fouling (AF) systems to prevent the growth of barnacles and mussels, which can prevent the heat transfer process. The design involves a copper anode which is connected to a control panel and attached horizontally under the cooling tubes of the box cooler. The unit also comprises of cathode plates.

The box coolers and anti-fouling systems were supplied as a complete assembly, which cut down the installation time and eliminated fabrication work at the yard.

The hydraulic system onboard the barge were designed, manufactured and commissioned by Hycom Hydac, while the five box coolers were supplied by Blokland Non-Ferro and the anti-fouling systems provided by Cathelco.

Leiv Eiriksson is a trailing suction hopper dredger (TSHD) that was delivered in May 2010.

The Panama Canal expansion project, which is also known as the Third Set of Locks Project, is being implemented to double the capacity of the Panama Canal and enable larger ships to pass through it. The project has generated approximately 27,000 direct jobs so far.

The dredging of the Culebra Cut (formerly Gaillard Cut) forms part of the project for which the current backhoe dredger was designed.

The deepening and widening works for this narrowest portion of the canal’s navigational channel were completed in March 2013, with about 3.2 million cubic meters of materials dredged.

The backhoe dredger will operate at the Culebra Cut and neighbouring sections of the canal to dredge blasted rock and heavy soil. The vessel will further maintain the canal along the Culebra Cut as the section is most prone to landslides.