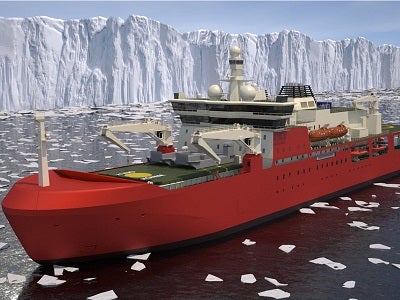 Antarctic Supply Research Vessel (ASRV), a new state-of-the-art research vessel with icebreaking capabilities, is being built for the Australian government, by DMS Maritime, a wholly owned subsidiary of Serco Australia.

Designed by Knud E Hansen, the ASRV is being constructed at Damen Shipyards Galati in Romania.

"The new research vessel is being built as part of the Australian Antarctic Division (AAD) programme."

The new research vessel is being built as part of the Australian Antarctic Division (AAD) programme, and will enable the country to explore Southern Ocean and Antarctica by supporting environmental and ecological research in the region.

The vessel will also resupply the Australian-Antarctic bases located in the Antarctic region. Delivery of the ASRV is scheduled in April 2020.

Design and features of the Antarctic Supply research vessel

The new polar research vessel will be a successor to the country’s ageing research vessel Aurora Australis, which has been in operation since 1989. The ASRV has been classified as a polar class three vessel.

It will be equipped for breaking up to 1.65m-thick ice, while sailing at a speed of 3k. It will also feature a 760m² flight deck and a 330m² hangar facility with a capacity to house two medium or four light helicopters.

Scientific equipment aboard the ASRV

The research vessel will feature science laboratories and offices spread across an area of 500m². It will also offer 24 modular science containers for research and study purposes along with science tenders, and labs for meteorology and air chemistry studies.

The vessel will be installed with an 8m stern A-frame and will be provided with a modular deep sea coring system and CTD system.

The vessel will provide 6,500m³ of solid cargo space, which is the equivalent of carrying 96TEU containers. The maximum cargo carrying capacity will be 1,200t.

The vessel will provide climate controlled accommodation for 32 DMS Maritime crew members and 116 AAD scientific personnel along with one doctor. The accommodation will be offered in single and twin cabins with ensuite facilities.

The vessel will also feature galley and dining, lounges, a theatre, a fitness and yoga centre, and a medical facility.

The vessel will be installed with a diesel-electric dual propulsion system integrating two controllable-pitch propellers and three each bow and stern thrusters, to produce a propulsion power of 26,600kW.

The maximum speed of the vessel will be 16k, whereas the speed is expected to be 8kt during silent operation.

The vessel will operate in the icy region for 90 days and will have a range of more than 16,000nmi at a speed of 12k.