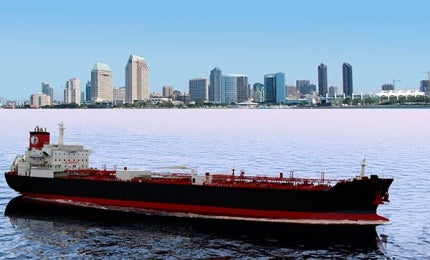 The construction and operation of the new vessels will comply with the Jones Act, which mandates that ships carrying cargo between the US ports be built in the US shipyards.

Orders and deliveries of the ECO-class tankers

The four-vessel APT contract will create up to 800 construction jobs at NASSCO San Diego shipyard and more than 165 jobs during the operation of the tankers."

The four-vessel APT contract will create up to 800 construction jobs at NASSCO San Diego shipyard and more than 165 jobs during the operation of the tankers. Deliveries of all the vessels are scheduled to conclude by 2017.

General Dynamics NASSCO signed a contract with DSEC, a subsidiary of Daewoo Shipbuilding & Marine Engineering (DSME), for the design and equipment package for the product tankers in June 2013.

In June 2014, NASSCO was awarded a contract by APT to design and build an additional product tanker. It was also contracted to build three ECO-Class product tankers for Seabulk Tankers.

Construction on the first tanker, APT-1, began with the first steel cutting in September 2014. Its keel was laid in March 2015. The first ECO-Class product tanker was christened as Lone Star State in October 2015, and was delivered in December 2015.

First steel for the second vessel, APT-2, was cut at NASSCO’s San Diego shipyard in December 2014, while that for the third tanker (APT-3) was cut in April 2015 followed by that for the fourth in May 2015.

The second ECO-Class product tanker was christened as Magnolia State in April 2016.

The ECO MR (medium-range) design ensures improved fuel efficiency by incorporating an optimised mono-hull form powered by a G-series MAN slow-speed main engine. The tankers will be fitted with dual-fuel-capable ancillary engines and will allow the future installation of an LNG fuel-gas system.

EcoLiner is an LNG-powered inland shipping tanker being built by Damen Shipyards Group for use in inland waterway shipping operations.

The vessel has an overall length of 186m and its length between perpendiculars is 178m. The moulded breadth and depth of the tanker are 32.2m and 19.1m respectively, and the deadweight is 50,000t.

APT ECO-Class tankers will be fitted with cargo tanks including slop tanks for carrying 53,700m³ (337,000 barrels) of liquid products. The cargo storage aboard the tanker will be segregated into six groups.

The propulsion system incorporates a MAN B&W 6G50ME-B9.3 main engine with maximum continuous rating (MCR) of 7,700kW at 90.3rpm and nominal continuous rating (NCR) of 5,775kW at 82.0rpm. The average fuel consumption of the vessel will be 21.9Mt/day.

The onboard electricity is supplied by three 1,240kW diesel generator sets. The propulsion system ensures a service speed of 14.5kt at the design draft and a cruising range of 10,200nmi. The LNG-conversion will provide for an additional range of 6,800nmi.