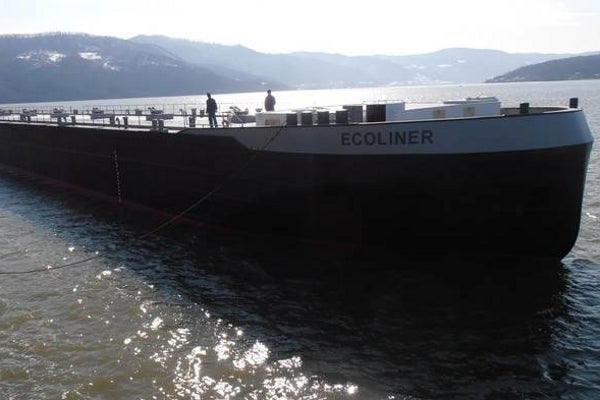 EcoLiner is an LNG-powered inland shipping tanker being built by Damen Shipyards Group for use in inland waterway shipping operations. The first EcoLiner tanker was launched in February 2015 at Damen’s shipyard in Romania and is scheduled for delivery in mid-2015.

The vessel was developed as part of the EU-supported LNG Masterplan for the Rhine-Main-Danube project, which is funded through the TEN-T programme by the European Union.

The inland shipping tanker is based on the Damen River Liner 1145 ship and is classified by Bureau Veritas. Its modular design can be configured for transportation of containers and dry bulk. The vessel provides up to 25% of fuel savings.

The vessel is fitted with up to ten cargo tanks with a capacity of 377m³ each, two 28m³ slop tanks, a galvanised piping single part cargo system, and two Kampers 2C232 / 100LHE cargo pumps with an unloading rate of 500m³/h each.

Accommodation aboard the Damen Ecoliner

Navigation and communication systems aboard the LNG-fuelled tanker

Each of the twin Damen 8000 tankers has ten epoxy-coated cargo tanks with five segregations and fixed tank-cleaning systems.

It also incorporates an advanced automatic identification system (AIS) developed by Shiptron for increased navigational safety. A Nufatron type NT-01 tachograph is fitted to automatically record speed and distance of the vessel.

A retractable Van der Velden FLEX tunnel is installed in the vessel to ensure sufficient water supply to the propellers and increases their efficiency when navigating in shallow waters. The propulsion system enables the EcoLiner to sail at a maximum speed of 10.8kt.