The Aquarius-G seismic research support vessel, along with its sister vessel Astra-G, is capable of being deployed worldwide.
The lines are specially constructed with V-shaped sections in the aft part creating diverting waves and U-shaped sections in the forward area to reduce pitching.
The deck of the Aquarius-G has a free space of 105.2m² to accommodate intermodal shipping containers.
The vessel is equipped with two main Caterpillar C32 ACERT engines.
Aquarius-G was delivered to its owner Rederij Groen in June 2013. 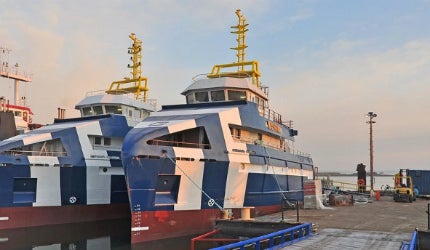 Aquarius-G is a seismic research support vessel owned by Rederij Groen. The guard vessel or chaser was delivered in June 2013 along with its sister vessel Astra-G.

Astra-G, the sister vessel of Aquarius-G was launched in October 2012. The two vessels are capable of being deployed worldwide.

Aquarius-G was specially designed to chase-off other ships from nearing the seismic research vessels during operations. The chaser will protect the seismic streamers fixed behind the survey vessels and aid them by providing board-to-board transhipment of goods and equipment.

The chaser was designed to provide a large freeboard, an open work deck, easy access to workshops and stores, and a large bridge for clear views over both foreship and aftdeck.

The fully air conditioned cabins of the vessel are located on the main deck and above, and are capable of accommodating 14 people in total. The vessel will consist of two single cabins and six double cabins.

The vessel is equipped with cool and freeze storages with a combined storage capacity of 16m3. The deck of the vessel has a free space of 105.2m2 to accommodate intermodal shipping containers.

The chaser is equipped with two High Holding Power (HHP) anchors with a combined weight of 675kg.

The vessel’s firefighting equipment includes two general service pumps with a range of 25m3 per hour and a portable emergency fire pump.

The vessel is propelled by two fixed-pitch propellers, two Fishtail rudders, and a Veth VT-100 bow thruster with an output of 110kW.

The propulsion system of the seismic research support vessel enables it to sail at a maximum speed of 14kt.