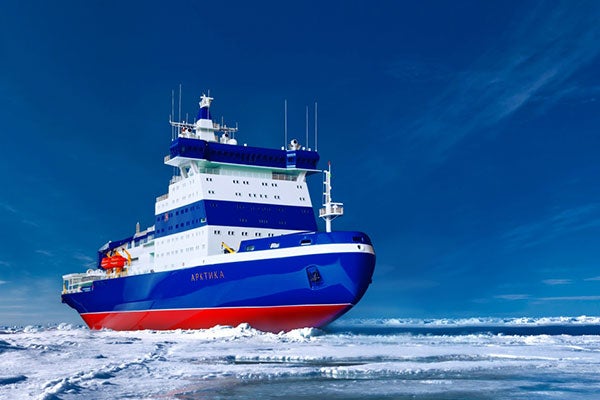 The Arctic is the first vessel in the series of three Project 22220 LK-60 Nuclear Icebreakers being built for Atomflot by Baltic Shipyard Shipbuilding. It is touted to become the world’s biggest and the most powerful icebreaker.

It will serve as a pilot project for the remaining two vessels, which will be constructed based on the results of the Arctic’s performance. The other two vessels will also be constructed by the same contractor, Baltic Shipyard Shipbuilding.

"It will serve as a pilot project for the remaining two vessels, which will be constructed based on the results of the Arctic’s performance."

The vessel has been assigned the КМ Icebreaker9 [2] AUT2-ICS EPP class notation by the Russian Maritime Register of Shipping (RS).

Purpose of the Arctic icebreaker vessel

The Russian nuclear-powered icebreaker will primarily aid shipping for vessels carrying hydrocarbons from deposits located on Yamal and Gydan peninsulas and the continental shelf of the Kara Sea to markets in the Atlantic and Pacific countries. The nuclear reactors aboard will let the vessel operate without refuelling for years and enable it to break ice of up to 2.8m thick.

The multipurpose vessel will also be used for exploration of offshore and onshore fields, transportation of goods and for fishing.

The ship will have an overall length of 173m, breadth of 34m, a design draught of 10.5m, a minimal operating draught of 8.55m, and a displacement of 33,540t. The dual-draft design will enable it to operate in both arctic waters and mouths of polar rivers. Based on the initial renderings, the vessel is also expected to house a helipad.

Propulsion of the nuclear icebreaker

The ship will be equipped with two RITM-200 nuclear reactors, with a thermal capacity of 175MW each, using enriched uranium-235 fuel (20%) to deliver 60MW of energy to drive the electric propellers.

The integrated steam-turbine plant will include two main turbo-generators, each with a capacity of 36MW, and feature a regulation system and generator, feeding, condensate and circulatory pumps, and other ancillary equipments.

Contractors involved with the Project 22220

OKBM Afrikantov is supplying the reactors for the vessel whereas the steam turbine plant is being supplied by Kirov-Energomash, a subsidiary of the Kirov Group.

OMZ-Special Steels is supplying the milled blanks made from chrome-nickel-molybdenum-vanadium high-alloy steel for the construction of the vessel. Fluidmecanica will supply a traction winch, a storage winch, a damping device and an escort system for the vessel.

In February 2015, Vineta completed the supply of six FI-1400 type ion-exchange filters, to be used for the deep chemical purification of water in the vessel’s marine systems.