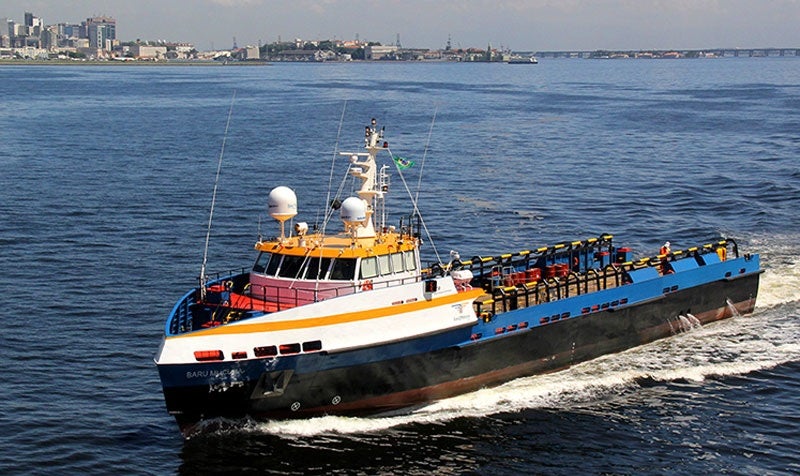 Under an eight-year charter agreement with Petrobras, Baru Offshore will operate the ships, which will be used to transport personnel, food, water, fuel, and medical equipment to oil and gas exploration and production activities, mainly in the Campos and Santos basins in Brazil.

Funding for the design and construction of the Baru Gorgona-class ships was provided by the Merchant Marine Fund (FMM) Funding, which is managed by the Brazilian Ministry of Transport. The design contract was awarded to Incat Crowther in April 2012.

The lead ship in the series, Baru Gorgona, was launched in June 2014, while the second vessel was delivered in February 2015. Baru Offshore took delivery of third and fourth vessels in November 2015.

The sixth and seventh ships were delivered in January and April 2016 respectively, followed by the commissioning of the ninth vessel in the series, Baru Orion, in July 2016. The last three vessels in the class were delivered in March 2017.

Marine-grade aluminium alloys are used in the construction of the Baru Gorgona-class supply vessels. The ships have a monohull structure designed in accordance with level 1 DP (dynamic positioning) standard set by DNV GL classification society.

Features of the fast supply vessels

The main deck cabin features a 30m² cargo area to accommodate either 60 offshore personnel or cargo, including medical supplies, food, small tools and other equipment. It is also installed with wet room and laundry facilities.

The upper deck of the Baru Gorgona-class vessel incorporates a wheelhouse with a control station at the aft end to enable safe operation at sea.

Up to 11 crew members can be seated in six cabins situated on the lower deck of the vessel. The lower deck also houses mess, galley and bathrooms.

An expansive cargo deck covering 225m² of usable area is located at the aft of the vessel to house 250t of cargo. Featuring a maximum load capacity of 3t/m², the cargo deck is lined with hardwood and protected by study cargo rails.

Driven by four V-type, four-stroke, 16-cylinder Cummins QSK50 diesel engines, the Baru Gorgona-class offers a service speed of 21k and a top speed of 25k. Each engine develops an output power of 1,800hp at 1,800rpm.