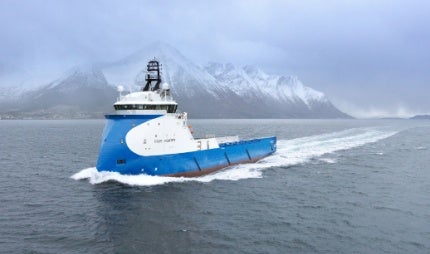 Blue Ship Invest has ordered a series of six medium-sized platform supply vessels based on Ulstein’s PX121 design. The first three vessels have been delivered while the other three vessels are set to be delivered in 2013.

"The Blue Fighter is currently chartered to the oil company Apache."

Blue Ship Invest initially ordered two vessels from Ulstein in 2010. The company further ordered four more vessels of the same design in June 2012, following the success of the first vessel, Blue Fighter, which was delivered in January 2012. The Blue Fighter is currently chartered to the oil company Apache.

Design features and storage capacity of the PX121 PSV

PX121 measures 83.4m in length and has a moulded breadth of 18m. The depth of the vessel to main deck is 8m and the maximum draught is 6.7m.

The vessel features a cargo deck area of 850m² with a deck load capacity of 2,300t and a maximum deadweight capacity of 4,242t.

Accommodation facilities on board the PX121 platform supply vessels

The vessel has the capacity to accommodate 24 people. The decks feature a floating floor providing low noise and vibration levels.

"The vessel has the capacity to accommodate 24 people."

Other facilities include a sick bay, a mess room, a room to accommodate galley, dry provisions, cooler and freezer, and a room which can be interchanged to accommodate pantry, wardroom, laundry and gym.

The platform supply vessel is equipped with a main knuckle boom shipboard crane with a lifting capacity of 3t and outreach of 18m. The vessel features an anchor windlass / mooring winch with a three drum configuration. It also features two 10t tugger winches and two 10t capstans.

Lifesaving and firefighting systems on the PX121 PSV

Lifesaving equipment and rescue equipment aboard the vessel includes two life rafts with a capacity for 25 people and a man overboard boat (MOB) with a single point davit system of movable type which can be propelled either by a diesel engine or water jet propulsion.

The navigation and communication systems of the vessel include an S-band ARPA radar and X-band ARPA radar, an electronic chart display and information system (ECDIS) with two independent stations, a conning system featuring two displays, radio installation based on GMDSS A3 requirements, and two Satcom C systems.

Machinery and propulsion system of the PX121 vessel

The vessel is configured with four main diesel generator engines including two 2,350kW engines and two 994kW engines. It also features an emergency generator with a capacity of 200ekW.

The vessel is capable of sailing at a maximum speed of 16kt.

Treatment systems onboard the PX121