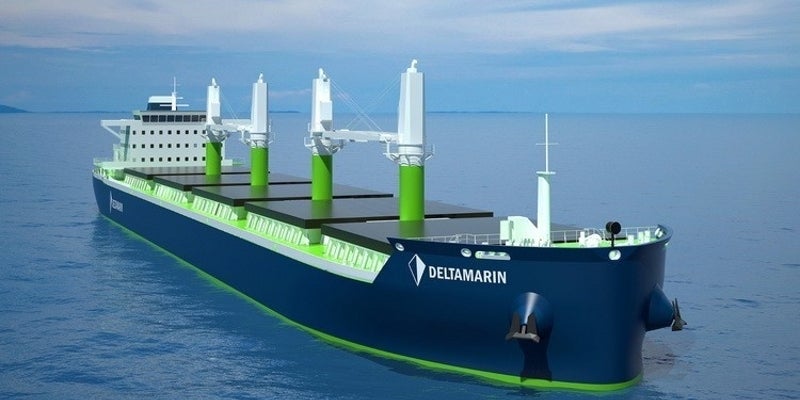 B.Delta26LNG will be the world’s first LNG dual-fuelled handysize bulk carrier vessel upon the completion of construction and delivery by 2018.

ESL Shipping entered into agreement with SSAB, a Swedish manufacturer of high-strength wear and structural steel, to provide inbound raw material sea transports within the Baltic Sea and from the North Sea in November 2015. As a result of the agreement, ESL Shipping ordered two large LNG-fuelled bulk carriers.

"The vessels will be bunkered with gas fuel in a number of LNG terminals around the Baltic region upon the completion of construction in early 2018."

The two B.Delta26LNG vessels in the B.Delta family will be constructed for the Finnish shipowner ESL Shipping by the Chinese Qingshan Shipyard of Sinotrans & CSC SBICO.

The two power bulk carriers will be built in Sinotrans Heavy Qingshan Shipyard. The vessels will be bunkered with gas fuel in a number of LNG terminals around the Baltic region upon the completion of construction in early 2018. The total value of the investment is estimated to be €60m ($65.37m).

In November 2015, the B.Delta26LNG carrier vessel design contract was awarded to Deltamarin, a subsidiary of AVIC International Maritime Holdings. The scope of the €2m ($2.1m) contract includes providing basic and detailed design, procurement handling and site assistance for the two vessels. The work will be carried out at Deltamarin’s offices in Finland over an estimated period of 12 months.

Deltamarin will design to optimise the ship with the world’s leading energy-saving technologies and clean LNG fuel. The vessel will be the latest proof of the success of Deltamarin’s B.Delta series, which is the proven family of highly energy and fuel-efficient B.Delta designs.

The vessel is also expected to exhibit efficient operation in ice-class conditions, far surpassing any other similar ships trading in such conditions. Extensive model tests have been performed for both open water and Ice Class 1A operations in reputable testing basins such as SSPA in Sweden and Aker Arctic Technology in Finland. The vessel will be classified according to the new DNV GL rules.

B.Delta26LNG vessel’s external dimensions will include a shallow draft of 10m, overall length of 160m, breadth of 26m and maximum deadweight of 25,600t.

The LNG-fuel powered vessel with highly optimised hull form is energy-efficient and environment-friendly to sail in pollution-sensitive areas such as the Baltic.

Its emissions will be below all current environmental requirements, and CO2 emissions per cargo tonne transported will be reduced by more than 50% compared to the present generation of vessels.

The Energy Efficiency Design Index (EEDI) value will also suit the International Maritime Organization (IMO) reference line standards in phase 3, which will come into force in 2025.

Propulsion of the bulk carrier

The bulk carrier will be equipped with both dual-fuel main and auxiliary machinery. It will have a Type C LNG tank with a capacity of approximately 400m³.

With a power-efficient ice operational performance, the carriers are expected to be comparatively better than other similar ships under the same ice conditions.