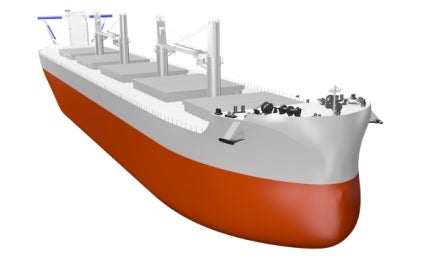 The new vessel is an upgraded version of the existing TESS58, which was the biggest in the TESS Handymax series of more than 300 ships that have been built at the shipyard. The innovative hull design of the new TESS64 bulk carrier incorporates the AEROLINE technology developed by Tsuneishi and Hiroshima University.

Tsuneishi and Hiroshima University developed an innovative concept in hull design called AEROLINE technology to achieve the highest standards of propulsion, stability and manoeuvrability. The new technology drastically reduces wind resistance up to 10%, annual carbon dioxide emissions to around 430t and SOx emissions with the use of low-sulphur fuel. TESS64 AEROLINE is the first ship built using this technology.

The fore upper bow of the vessel is rounded and combined with a cut-corner design for a stepped outer, giving a streamlined shape to the ship. The hull design increases the vessel’s fuel efficiency by 20%, compared with conventional TESS58 models.

TESS64 AEROLINE exceeds the latest regulatory requirements on exhaust emissions being imposed by the International Maritime Organisation (IMO), which are effective from January 2013.

A shallow draught design enables the ship to move in and out of the port while in compliance with port restrictions for carrying heavy cargo loads. The vessel’s massive cargo capacity allows it to effectively transport heavy loads of approximately 79,000m³.

The vessel is further fitted with a bow design named the Seaworthy system, which reduces resistance against waves in the fore bow during high seas, as well as in high-load conditions. It helps the vessel to achieve up to 5% lower sea margin through low resistance, even in rough sea conditions.

TESS64 AEROLINE is outfitted with a standard ballast water management system. The hull bottom is strengthened for heavy items, such as steel products.

TESS64 AEROLINE is equipped with a fuel-saving device called MT-FAST, which consists of multiple twisted blades attached to the front of the propeller to improve the flow of water around it and recover the energy loss made by the vortex, which means propulsion efficiency is improved by approximately 4%. The device was jointly developed by Tsuneishi and Monohakobi Technology Institute (MTI), a wholly owned subsidiary of Nippon Yusen Kabushiki Kaisha (NYK).

The vessel is also fitted with a fresh air intake system (FAIS), which cools the ship’s engine by direct inhalation of cool air from the outboard engine to improve combustion efficiency.