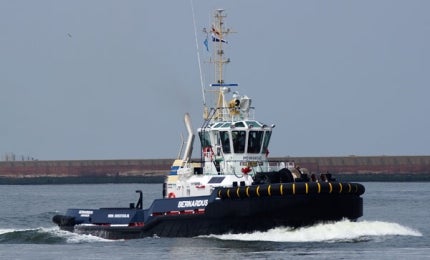 Bernardus is the first azimuthal stern drive (ASD) tugboat built by Damen Shipyards. The new vessel was ordered by the Netherlands-based Iskes Towage & Salvage in October 2012 and was delivered in May 2014.

Accommodation onboard the vessel

The hybrid tug provides accommodation for seven people, with two individual cabins for the captain and chief engineer, two double crew cabins and one single crew cabin. The cabins are insulated and finished with durable modern linings to limit noise and vibration levels.

Located at the fore of the vessel, the wheelhouse features acoustical ceiling, floating floors and air-conditioning. Other facilities include a galley, mess/dayroom with lockers, settees, radio and television, dry store and sanitary facilities.

Towing equipment includes two anchors with a capacity of 360kg, a 5t electrically driven capstan at 15m/min and towing pins with a safe working load (SWL) of 86t.

The vessel features an electrically driven two-speed towing and anchor winch with double drum and warping head. The winch has a pull force of 35t/min at an outreach of 9.1m and slack rope speed of approximately 28m/min. The towing winch on the aft deck is outfitted with spooling devices. It has a pull of 35t/min at 9m outreach and 33t/min at 9.5m outreach. The slack rope’s maximum speed is 27m/min and the brake holding load for both winches is 150t.

"The tug also includes an electro-hydraulic auxiliary pump and powerful flood-lights fitted at the fore and aft decks."

The tug also includes an electro-hydraulic auxiliary pump and powerful flood-lights fitted at the fore and aft decks.

When in free-sailing mode, the vessel runs on an auxiliary generator set, which is used for station keeping, manoeuvring and free sailing at a maximum speed of 8.5k. In standby mode in combination with the optional battery pack, the vessel’s speed is approximately 4k and in towing mode while performing push and pull operations the vessel can reach a maximum speed of 13.4k.