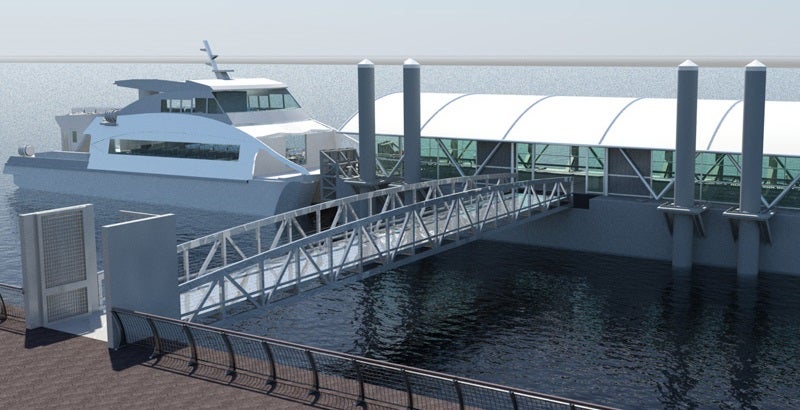 The Citywide Ferry Services Project is being developed to provide citywide ferry services in New York City, US, by integrating five new ferry routes with the existing route. The project is expected to serve more than half a million residents in 21 neighbourhoods.

The new routes will be served by 18 state-of-the-art passenger ferries, which will be supplied by Hornblower Company. The new ferries are expected to execute a combined 4.6 million passenger trips a year.

The project is being developed by the New York City Economic Development Corporation (NYCEDC), in collaboration with the Office of Mayor. Hornblower Company has been appointed as the operator.

The project will help reduce the cost of each ride from the existing $4 to $2.75 and is expected to generate approximately 150 long-term jobs.

Design of the new ferries for the Citywide Ferry Services Project

Based on the initial renderings, each passenger ferry’s upper deck is expected to be equipped with 42 seats, a portable concession stand, a wheelhouse and a storage cabinet.

The main deck hand will be equipped with 123 seats, dedicated spaces for four wheelchairs and four strollers, six counters with charging stations, a concession stand, and a heated open deck.

The ferries will also be equipped with Wi-Fi throughout and spaces will be provided for storing bicycles.

Each 24m-long ferry will run on T3 engines, and the hull is designed to reduce wakes and maximise fuel efficiency.

Approximately 77 million aluminium cans are estimated to be used for the construction of the 18 ferries.

The Astoria route will stretch from Astoria to Wall Street / Pier 11, with the landings located at the two ends, including Roosevelt Island, Long Island City, and East 34th Street.

"The project is being developed by the New York City Economic Development Corporation (NYCEDC), in collaboration with the Office of Mayor."

The Rockaway route will stretch from Rockaway to BAT and further to Wall Street / Pier 11, with a landing at each site.

The Soundview route will stretch from Soundview to Wall Street / Pier 11, with landings located at both ends, including East 90th Street and East 62nd Street.

The Lower East Side route will stretch from Long Island City to Wall Street / Pier 11, with landings located at both ends, and at East 34th Street, Stuyvesant Cove and Grand Street in between.

The plan for new routes from Coney Island and Stapleton on Staten Island are in the initial stages and will be constructed in the next phase.

The new 35ft-wide, 90ft-long passenger ferry landings will be equipped with canopies and wind screens, ticket machines and waiting areas.

Financing for the transportation project in NYC

The city of New York is investing $55m for the construction of the ten new ferry landings and rehabilitation of six landings. It will also provide $30m a year for a period of six years to support the operations, and an additional $10m for initial vessel upgrades and ticketing machines. Some of the project expenditures are planned be met through sponsors.