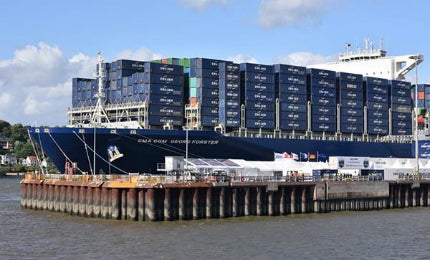 CMA CGM Georg Forster is the second in a series of six 18,000 twenty feet equivalent (TEU) container vessels built by Samsung Heavy Industries (SHI) for the CMA CGM Group. The first vessel in the series, CMA CGM Kerguelen, was delivered in March 2015.

The second vessel is named after Georg Forster, the renowned German travel writer from the 18th century. She began her first rotation in June 2015, under which she sails and calls at the ports of the French Asia Line (FAL) rotation, which is one of the most symbolic lines of the CMA CGM Group. The vessel was christened at a ceremony in Hamburg in July 2015.

CMA CGM Georg Forster bears the UK flag and calls at the ports of 11 different nations. The 18,000TEU vessels are currently the biggest container ships in the CMA CGM fleet. Delivery of the remaining vessels are scheduled to conclude by 2015.

The container vessel incorporates a double-hull design that is similar to that of the 16,020TEU and the 13,800TEU series. The vessel design has been optimised by a tall castle, raised lashing gateways, as well as external lashing and new twist locks.

The forward of the hull houses a unique castle, which improves the usage of space while providing better visibility from the bridge. The layout provides the vessel more resistance to torsion and allows the placement of fuel tanks beneath the castle.

The tanks are thus protected by the double hull, which ensures the vessel complies with MARPOL 12A regulations. The engine room at the rear is located near the propeller, which avoids loss of space due to the long propeller shaft.

The vessel has an overall length of 398m, width of 54m, draft of 16m, and container carrying capacity of 17,722TEU. It features 1,254 plugs for refrigerated containers.

"The forward of the hull houses a unique castle, improving the use of space."

CMA CGM‘s container ship also features an extra decanting tank for better safety. The additional tank allows for the treatment of bilge, engine, and grey water. Additionally, the deck is installed with electrically-powered equipment to avoid the risk of hydraulic fluid leakage. The fast oil recovery system aboard the vessel quickly retrieves hydrocarbons in the fuel bunkers without the need to access the hull.

The sustainable features reduce the vessel’s CO² emissions by 10% compared to the last generation vessels. Georg Forster is one of the world’s most eco-friendly container transport vessels as it emits 37g of CO² / km for each container. Moreover, its environmental impact complies with the 2025 energy efficiency standards.

The container vessel is powered by an MAN B&W 11S90ME-C9.2 engine. The electronic injection engine is installed with an exhaust by-pass system to ensure energy savings at low loads, thus cutting down fuel intake by approximately 1.5% at slow speeds.

The twisted leading edge rudder system fitted to the vessel enhances the water flow optimisation, while minimising fuel consumption and CO² emissions. The installation of a bulb on the rudder helps to improve the energy efficiency by roughly 4%.