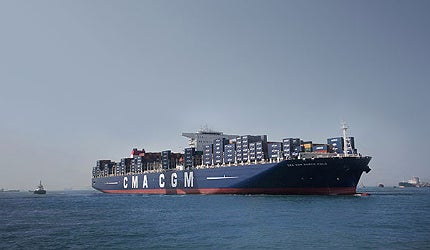 CMA CGM Marco Polo is the largest container ship in the world, with a cargo capacity of 16,020 TEU. The vessel was delivered to its owner CMA CGM in September 2012. It was built by Daewoo Shipbuilding & Marine Engineering’s (DSME) shipyard in South Korea.

"CMA CGM Marco Polo is the largest container ship in the world."

CMA CGM Marco Polo was constructed in parts. Each part, weighing around 2,000t, was lifted using floating cranes. The parts were assembled and welded in the dry dock.

Marco Polo measures 396m in length and 54m in width, and has a draft of 16m. The vessel accommodates 27 crew and is capable of sailing at a speed of 25.1kts.

The vessel is configured with a Wartsila14RT-Flex96C low speed diesel engine which complies with the regulations laid in the Annexe VI of the MARPOL 73/78 Convention for cutting down air pollution from ships. Annexe VI came into force in May 2005.

The Triple-E class container ships are to be built by South Korea’s Daewoo Shipbuilding & Marine Engineering (DSME). They will be the largest container ships in the world, with a container carrying capacity of 18,000TEU.

The engine, weighing 2,300t, produces a maximum power output of 80,080kW at 102rpm and enables smokeless operation at all speeds. The engine measures 13.5m in length and 27.3m in width.

Besides the environment friendly propulsion engine, the vessel also features various pieces of equipment that enhance its environmentally friendly characteristics.

The efficiency of the engine is enhanced through an exhaust gas bypass system, which cuts down the consumption of fuel by 1.5% during low speed operation.