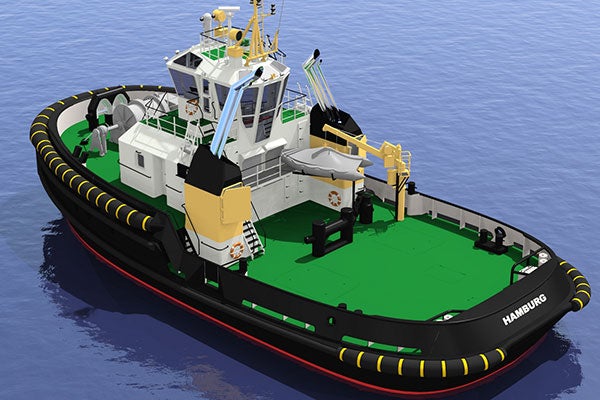 Damen has secured a contract from Fratelli Neri to deliver a new ASD 3212 tug.

The series was launched in March 2013 and the first tug was delivered to Petersen & Alpers in February 2015.

SAAM SMIT Towage contracted Damen Shipyards for a Damen Tug 2913 in October 2015. Delivery of the vessel, named SST Rambala, was made in May 2016.

Italian towing firm Fratelli Neri placed an order for three ASD 2913 tugs in July 2016. The vessels were delivered in November 2016.

The highly manoeuvrable vessel offers superior seakeeping and towing capability. It is the first Damen tug to feature a double hull, complying with the latest safety regulations.

The forward deck is fitted with a heavy-duty rubber W-block fendering, a cylindrical fendering and a double-pole towing bitt. The heavy-duty, independent, double-drum and hydraulic anchor / towing winch can pull 38t at a rate of 12m/min.

An obstacle-free aft deck features flush engine room hatches and a towing bitt. It can be fitted with a heavy-duty, single-drum, hydraulic towing winch and spooling device, as well as a SWL 100t towing hook, a crane and a capstan.

Cabins on the tugboat accommodate up to ten personnel. The vessel also features a mess room with lockers, settees, alarm information and nautical communication, and a galley with modern equipment. All sanitary spaces aboard the boat provide hot and cold water.

The boat is furnished with insulated spaces, air-conditioning, and durable and maintenance-friendly materials. The mess room and cabins are fitted with information displays, television, radio and computer systems.