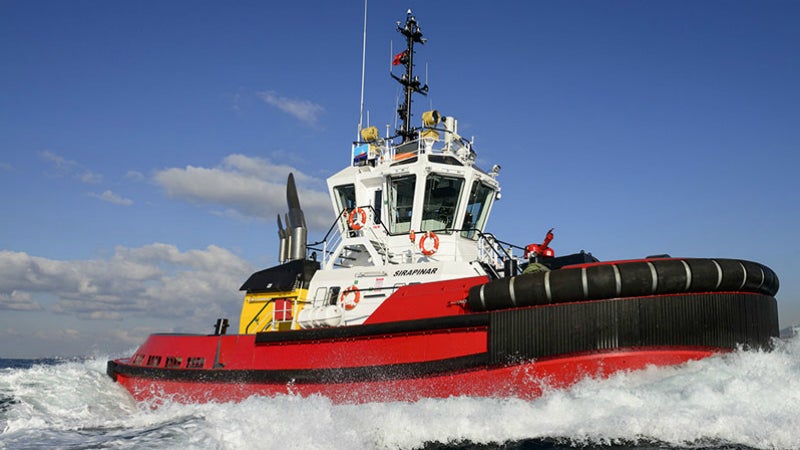 The Sirapinar-class azimuth stern drive (ASD) tugboats are being built by Sanmar to meet demand for compact tugs with high bollard pull capacity.

The class is based on the RAmparts 2200 design developed by Robert Allan Limited (RAL).

Sanmar placed a contract with RAL to design the new class based on the highly successful Bogacay series in mid-2015.

The first boat was delivered to Drydocks World in November 2016. Sanmar received a contract from Rimorchiatori Napoletani for two Sirapinar-class tugboats in March 2017.

The hull and layout designs of the Sirapinar-class have been developed by RAL based on extensive feedback received from owners and crews. The twin Z-drive, diesel-powered tug delivers high-performance during ship-handling duties. The bow, stern, and sides of the boat are installed with a heavy-duty rubber fender system.

The design integrates high automation for low-manning operation according to the most commonly acceptable manning standards. The engines and essential equipment are resiliently mounted to meet the requirements of flag authorities.

A Data Hidrolik DTH 45-90P tow hook on the tug is equipped with pneumatic auto-release, while an electric capstan on aft offers a swivelling load capacity of 5t.

The onboard fire-fighting (FI-FI) equipment encompasses a pump with a delivering capacity of 1,200m³/hr and a water / foam remote-operated monitor with a capacity of 200/150m³/hr.

Navigation systems aboard the vessel include a radar, a global positioning system (GPS), a differential GPS (DGPS), an echo sounder, a chart plotter, a magnetic compass, an AIS autopilot, a speed log, and a bridge navigational watch and alarm system (BNWAS).

The tug integrates communication systems including an intercom, a telephone, and an A2 (GMDSS A2) global maritime distress and safety system. The ASD tug can be optionally equipped with hands-free very high-frequency (VHF) units and intercom, GMDSS A3, and secondary radar.

The ASD tug can serve a day boat or can be equipped with full accommodation facilities to house a crew of up to five personnel. Accommodation for the captain is also provided in the main deckhouse. The cabin includes washbasins, a mess, lounge, and galley.

The shipboard electricity is supplied by two CAT C 4.4 diesel generators with a power output of 86ekW each. The propulsion system enables a speed of 11kt.