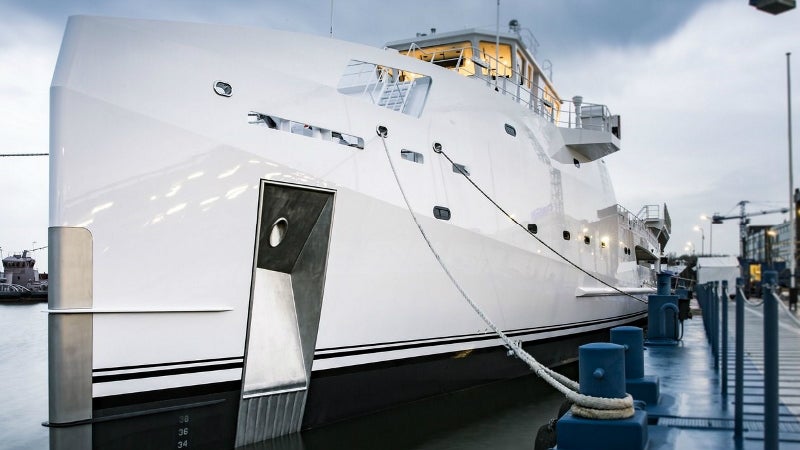 The YS 6911 range of yacht support vessels is being built by Damen Shipyards Group and AMELS to carry larger tenders, helicopters and submersibles in support of mother yachts. The vessels are designed to make shipowners entirely self-sufficient by carrying cargo and equipment from the mother yachts.

GAME CHANGER, the latest boat in the YS 6911 range of yacht support vessels, was launched by Damen in February 2017.

Based on Damen’s patented and proven SEA AXE hull design, the YS 6911 was developed in association with DAMEN Research, the Delft University of Technology, and Dutch institute MARIN.

The SEA AXE design provides high power and enhanced sea-keeping capabilities, ensuring high speeds of more than 20kt even in adverse sea conditions. The design reduces resistance by up to 15% and vertical peak accelerations by up to 75%. It integrates state-of-the-art navigation and communication systems, and offers the crew a full view of aft deck and helicopter operations.

The yacht support vessel has an overall length of 69.15m, beam of 11.5m, depth of 5.4m and maximum full load draught of 4m. The gross tonnage of the vessel is approximately 1,200t.

The 250m² open deck is fitted with a high-performance knuckle boom crane for safely launching and recovering large tenders and submersibles. It also features standard container twistlocks for rapidly dispersing modular equipment and boat cradles. The crane is capable of lifting 12t loads with a maximum outreach of 5m, and 6t loads with an outreach of 11.5m.

The vessel offers an additional 110m² of storage space below deck, which can be used to hold large quantities of marine and aviation fuel, fresh water, luggage and spare parts.

The YS 6911 features a LY3 / MCA fully-certified helideck for helicopter operations, as well as a weather-protected hangar and lift system. The vessel also integrates a helicopter workshop and supports on-board refuelling and reconditioning.

The helideck can handle a 5t-class single helicopter, such as the Eurocopter AS365 or the AgustaWestland AW109.

The hangar facility can be replaced with a luxury dive-space, which can be equipped with a certified double-lock decompression chamber, a high-pressure and enriched air production facility, and a filling station for Scuba dive cylinders.

Accommodation is also offered for divemasters and submersible pilots on-board the vessel.

“The vessel offers an additional 110m² of storage space below deck, which can be used to hold large quantities of marine and aviation fuel, fresh water, luggage and spare parts.”

The vessel features a customised VIP lounge with 90m² of space, while the decks feature modern interiors and artificial teak finishes.

The YS 6911 integrates offices, a hospital, a professional galley, a fitness centre, and accommodation facilities for 22 crew and staff. The accommodation spaces are equipped with modern heating, ventilation and air conditioning (HVAC) systems.

The vessel is powered by four MTU 16V4000 M63L 1A diesel engines with a power output of 2,240BkW each, as well as two 150kW bow thrusters. The power-plant is equipped with automation, control and monitoring systems.

The propulsion system provides a maximum speed of up to 20kt and a range of 4,500nmi at a speed of 16kt.