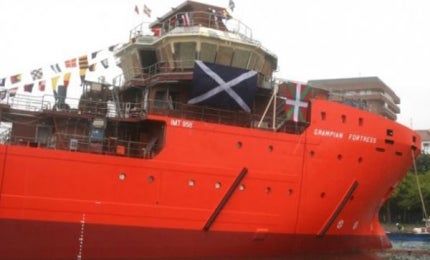 Grampian Fortress is the first of two F-Class Emergency Response and Rescue Vessels (ERRVs) under construction at the Balenciaga Shipyard in Northern Spain, for Craig Group.

The vessel was launched by Balenciaga Shipyard in August 2015. The second vessel in series, Grampian Freedom will be launched in the second half of 2015. The new ERRVs will be operated by North Star Shipping, a part of Craig Group.

The two vessels are being built as part of a £70m investment plan announced in September 2013 for the construction of two F-Class IMT 958 and four D-Class IMT 950 ERRVs to add modern vessels to the fleet.

"The vessel was launched by Balenciaga Shipyard in August 2015."

Deck equipment and storage capacities of the response and rescue vessel

The Grampian Fortress ERRV offers a deck area of 50m² and deck loading strength of 5t/m. It is installed with a 2t electric-hydraulic crane and a deck tugger. The vessel features control positions at bow, aft, port and starboard sides, as well as a fully integrated joystick control system.

Grampian Defiance is the fourth and final ship in the series of four new D-Class ERRV constructed in northern Spain.

Navigation and communications of F-Class IMT 958

The ship offers crew cabins to accommodate up to 20 personnel. It is equipped with a mess room, as well as recreation and leisure facilities such as two lounges, a sauna and a gymnasium.