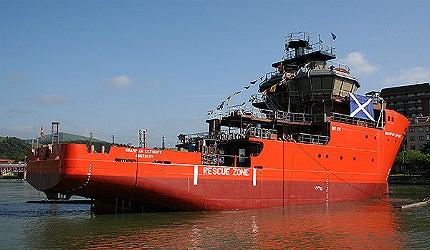 Grampian Defiance is the fourth and final ship in the series of four new D-Class emergency response and rescue vessels (ERRVs) constructed in northern Spain by the Balenciaga Shipyard.

"The second and third vessels, Grampian Dee and Grampian Discovery, were launched in November 2011 and April 2012 respectively."

The vessel was launched in May 2012. She has been chartered to DONG E&P to support their offshore operations in the North Sea. The contract is set to start in September 2012.

The four D-Class vessels represent an investment of $43.7m. Total investments made by Craig Group in the new-build programme since 2003 stand at $337m. The vessels were ordered to replace the older tonnage with new ones.

The first vessel of the series, named Grampian Don, was launched in August 2011. The second and third vessels, Grampian Dee and Grampian Discovery, were launched in November 2011 and April 2012 respectively.

The Grampian D-Class emergency response and rescue vessels are of NSS-IMT 950 design, developed by the ship designer OSD – IMT, the UK arm of Offshore Ship Designers.

The Grampian D-Class vessels have an overall length of 50.7m. Length between perpendiculars is 47.7m. Moulded breadth of the ships is 13m, while depth to main deck is six metres. Draft at full load is 4.3m.

Crew facilities and deck equipment of the Grampian Defiance

A total of 15 crew members can be accommodated onboard the vessel. There are 15 single berth cabins with water closets.

"The vessel was launched in May 2012. She has been chartered to DONG E&P to support their offshore operations in the North Sea."

Recreation and leisure facilities include a mess room, two lounges, a sauna for steam baths, satellite TV and a gymnasium. There is also an office for the client.

The vessel’s deck is made of steel and measures about 120 square metres. It has a loading capacity of three tons per square metre.

Rescue and response equipment on all D-Class vessels

All four of the ERRVs are provided with a fast rescue craft and are equipped with a single or double daughter crafts.

The fast rescue craft is of Avon SR 6.4 model. It runs on petrol and carries up to 15 people. The Delta Phantom daughter craft measures 10.25m in length and runs on diesel.

The new D-Class vessels are fitted with two (forward and aft) Furuno marine radars, both of which have automatic radar plotting aid (ARPA) capability.

Some of the important communication equipment onboard the Grampian D-Class vessels include Sat Comm, MF/HF Radio, Smartpatch Phones and ICOM IC A110 radios.

Grampian Defiance is powered by a Caterpillar MAK 6M20 main engine. There are two Caterpillar auxiliary engines of 547kW each, as well as an emergency generator of 365kW.

Propulsion for transit is provided by a single controllable pitch propeller (CPP). For smooth manoeuvring, the ship is fitted with an azimuth bow thruster connected to a joystick control system.