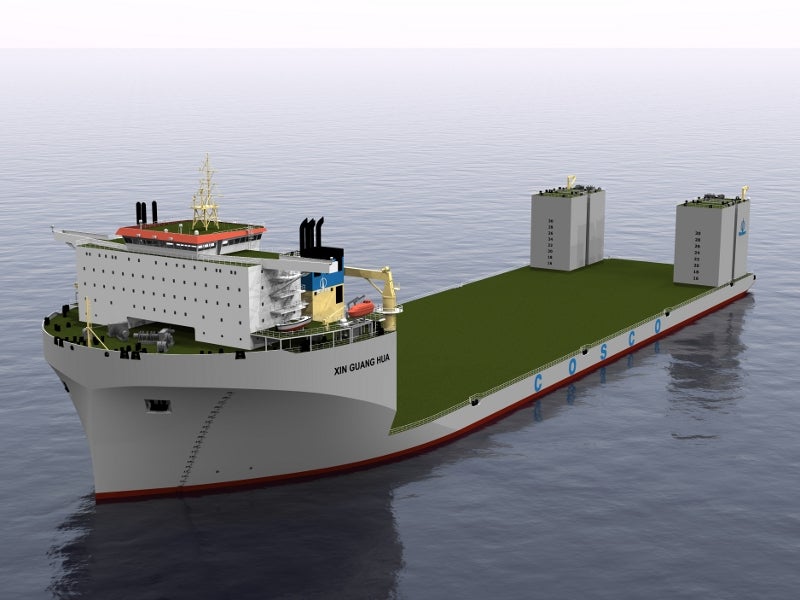 Xin Guang Hua is a new semi-submersible vessel being built by COSCO Shipping Company (COSCOL). The 98,000dwt heavy-lift vessel is the second largest of its type in the world, after Dockwise Vanguard. Formerly known as Guang Hua Kou, the vessel was renamed following the merger of COSCO and China Shipping.

The semi-submersible vessel was launched in April 2016 with a steel cutting ceremony. It is being built at CSSC Offshore & Marine Engineering’s Guangzhou shipyard in China, and is expected to be delivered in the last quarter of 2016.

Designed with enhanced internal strength, the vessel can handle both stern and side loading. It will have a deck submerging capacity of 16m, which will enable it to carry large floating structures.

Propulsion for the Chinese semi-submersible vessel

The propulsion system will also feature two fixed pitch propellers and Class 2 dynamic positioning system. To improve the safety and reliability of the vessel, it is being designed with double separate redundant propulsion and ballast systems.

The system enables the vessel to sail at a maximum service speed of 13.5k.

The vessel is equipped with eight transverse bulkheads, one longitudinal bulkhead at centreline and another two at 17m (55.8ft) from centreline.

For large loads, the vessel features four easily removable stern buoyancy casings, two of which are stowed inside forward recess.

The vessel can be used for dry transportation of ships, drilling platforms, offshore structures, jack-up rigs and construction equipment. It can provide 440V of power supply to cargo during transit.

The vessel is equipped with 112 ballast tanks, located on the top, bottom, centre and side, which improve its motion and acceleration.

Ballasting will be controlled by four high-capacity air compressors with a capacity of 8,500m³/h. The compressors can complete ballasting operations in approximately six hours.

"The heavy-lift vessel will be equipped with a diesel-electric propulsion system providing a power output of 10,500kW."

Accommodation for 100 personnel is also available on the ship.

In March 2016, COSCOL was awarded a contract by Shell to transport its 41,165t Appomattox semi-submersible offshore platform from South Korea to Ingleside, Texas. COSCOL will make the delivery using the Xin Guang Hua vessel.

ABB has supplied its turbochargers for the heavy-lift vessel.