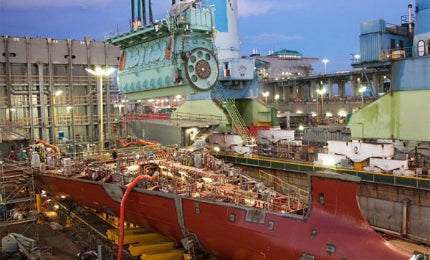 The vessel was christened and launched by Sophie Sacco, wife of Michael Sacco, who’s the President of Seafarers International Union, the ship’s sponsor.

The 764ft Marlin-class containership is the biggest dry cargo ship that runs on LNG. It provides for five times more 53-foot containers than current ships in Puerto Rico. Its construction began with the cutting of first steel at NASSCO shipyard in San Diego, California, on 25 February 2014.

Isla Bella is a part of the contract awarded to NASSCO, in December 2012, for designing and constructing two 3,100 twenty-foot equivalent unit (TEU), LNG-powered containerships at their shipyard in San Diego, CA.

Construction of the two vessels is estimated to cost more than $350m and create more than 600 shipyard jobs. The second Marlin Class vessel is expected to be floated in the third quarter of 2015 and enter service in the first quarter of 2016.

It features a ballast water treatment system making it the world’s greenest ship of its size. It is also capable of burning diesel when needed, thereby reducing the air-polluting emissions.

The ship also consists of high volume of refrigeration equipment to ensure transport of pharmaceuticals, produce, and other products to the residents of Puerto Rico in the best possible condition.

Doosan Engine constructed the 539t 8L70ME-C8.2GI engine under license from the designer MAN Diesel and Turbo. The two-stroke, dual-fuel engine requires lesser energy to travel the same distance and help preserve the environment, compared to the existing engines in its segment.

The core systems of the engine, such as the dual fuel diesel generator (DFDG) and the fuel gas supply system (FGSS), passed the extensive factory acceptance test (FAT).

Financing for the Marlin-class containerships

The U.S. Maritime Administration (MARAD) provided a $324.6m loan guarantee to TOTE Shipholdings and Saltchuk Resources for constructing the Marlin-class vessels. The loan was granted under Title XI Loan Guarantee programme, initiated to promote the growth and modernisation of US shipyards and the US Merchant Marine.

Pivotal LNG, a subsidiary of AGL Resources, and WesPac Midstream were contracted by TOTE in February 2014, to provide LNG to the two new container ships (including Isla Belle).