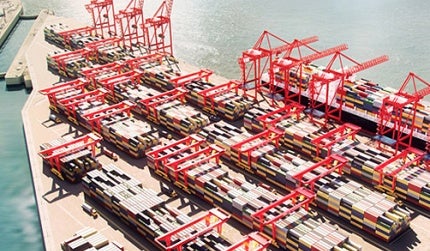 Liverpool 2 is a new deep-water container terminal built on the River Mersey in Seaforth, UK. The construction of the terminal started in 2013. The project received approval to carry out dredging activities in December 2012. It received three licences from the Marine Management Organisation (MMO) to perform the construction activities. The new terminal was opened in November 2016.

"The project is slated for completion in 2015."

The new terminal comes under the jurisdiction of Peel Ports, which also owns and operates the Port of Liverpool and the Manchester Ship Canal.

The principal contractor for the project is Lend Lease. The contract was awarded in September 2012.

The total investment in the terminal project is estimated to be £400m ($495m). The European Investment Bank (EIB) provided funding for about half of the project cost.

Benefits of the new container terminal

The new terminal generated more than 5,000 jobs and adds 600,000TEU capacity to the port’s current capacity of 1.5 million TEU. The terminal is capable of handling up to two 13,500TEU vessels simultaneously and eliminate up to 200 miles of road or rail transport per container journey. It provides the quickest and cheapest route to major markets and is the best connected container terminal in the country, with ten motorways located within ten miles.

Cargo owners based in the midlands and the northern half of the country benefit the most by saving up to £300 ($470) a container by shipping through Liverpool.

The project is expected to add approximately £5bn ($7.8bn) of gross value to the local economy.

Construction of the Liverpool 2 container terminal

The project involved the construction of a 854m quay wall, in-filling works to create a new landmass measuring 170,000m², dredging of a new berthing pocket measuring 16.5m-deep and 62m-wide adjacent to the quay wall, and dredging of the approach channel approximately 8m below chart datum.

The construction of the new terminal necessitated laying 30,000m³ of concrete, and installation of 15,000m of steel piles and 6,100m of new crane rails. Dredging of the berthing pocket, on the other hand, involved removal of approximately five million cubic metres of material from the river bed and required nearly three million cubic metres of infill material to create the new container area.

Other ancillary infrastructural works involved the construction of 3,500m of new road, 230,000m² of surfacing, and 2,500m of fencing. The project also witnessed improvements made to 3.5km of roads at the port.

The planning activities for the project were carried out in conjunction with the Marine Management Organisation, the Environment Agency and Natural England, to meet the environmental requirements.

More than 500,000m³ of material was deposited around Taylor’s Bank and other licensed offshore sites. The noise levels during construction were minimised by implementing diesel straddle carriers, minimising the use of electric cantilevered rail-mounted gantry cranes (c-RMGs).

The new terminal is equipped with eight quay cranes, supported by 53 shore-based tugs and trailers, and 27 c-RMGs. The quay cranes are capable of operating at wind speeds above 50mph.