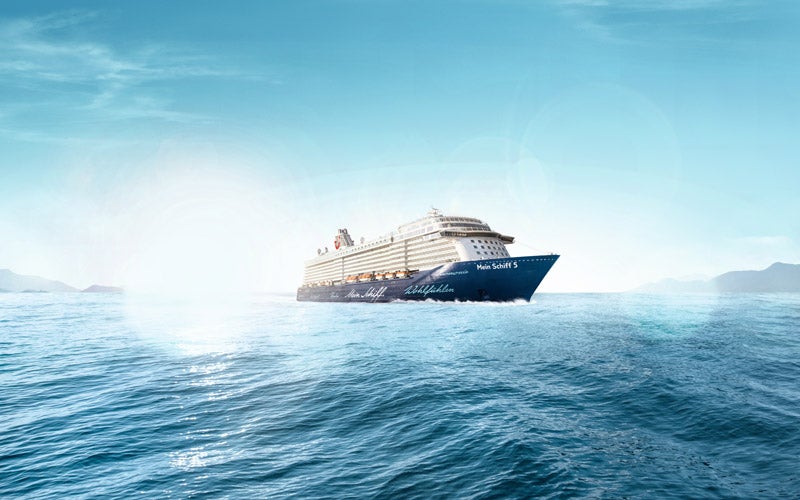 The construction of the two new vessels was funded by a bank syndicate, including KfW IPEX-Bank, UniCredit, and an undisclosed European commercial bank.

Resembling her sister ships Mein Schiff 3 and Mein Schiff 4, the cruise ship measures approximately 295m in length and 35.8m at its widest point. It has a draught of 8m and weigh 99,500t.

The cruise ship was constructed using innovative and environmentally friendly technologies to meet the latest technological standards. It consumes approximately 30% less energy compared to cruise liners of a similar size.

The ship uses a combined exhaust gas cleaning system, integrating a scrubber and a catalytic converter, to reduce sulphur and nitrogen oxide emissions by approximately 99% and 75% respectively.

“The vessel can accommodate 2,534 guests in its double-bed configuration, in addition to approximately 1,000 crew members.”

Two cabins are wheelchair-accessible, and deck 3 and deck 9 features four barrier-free cabins each.

The vessel can accommodate 2,534 guests in a double-bed configuration, in addition to approximately 1,000 crew members.

Suites and cabins on board Mein Schiff 5

The Theme suites situated on deck 10 are the largest on the ship, featuring a 54m² living space and a 15m² veranda.

The Diamond suites on deck six have an area of 47m² each in addition to a large outdoor area. The Junior suites on deck 10 provide 26m² of living space and an 8m² balcony.

The Kombi Balcony cabins on deck 7 feature 9m² large balconies and 17m² living spaces. The spa balcony cabins, which provide a living space of approximately 17m² and a 5m² balcony, are located near the spa and sauna area on deck 11.

It also features 13 restaurants and bistros, 13 bars and lounges, as well as a bakery.

Mein Schiff 5 is powered by a 28,000kW diesel-electric engine and propellers supplied by Rolls Royce. The vessel’s maximum speed is 21.7k.

TTS Marine has been contracted to provide a total of 40 items, including shell doors, platforms, covers, elevators and gangways, as well as luggage and provision side loading systems for the vessel.

R&M carried out turnkey outfitting of the vessel’s provision area, the HVAC rooms, the crew mess room, the reception, and the X-lounge on deck 14.

The on-board casino was installed by Century Casinos, while Martin Audio equipped the vessel with its proprietary CDD Series audio system.