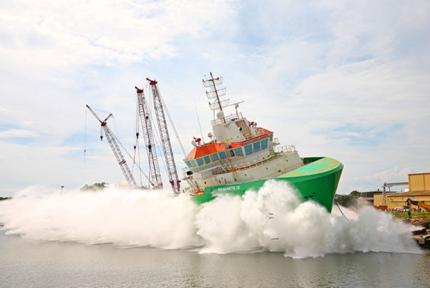 MV Bravante IX is a new platform supply vessel (PSV) being built at Eastern Shipbuilding’s shipyard in Nelson Street, Panama City, Florida. It is the fifth and last vessel of the Bravante Platform Supply Vessel (PSV) series and is being built for Boldini, a part of Bravante Group, a Brazilian company.

Bravante IX was christened and launched at a ceremony held in Eastern’s shipyard in August 2014 and is expected to be delivered to her owner in January 2016.

MV Juanita is a new platform supply vessel (PSV) of the SALT 100 PSV design, constructed by Kleven Maritime for its owner Ugland Offshore.

The U.S. Department of Transportation, through its Maritime Administration (MARAD), provided a $241m Title XI loan guarantee for the construction of the five vessels.

Bravante IX is of VARD’s (formerly known as STX OSV) SV290 design. It has an overall length of 86.5m, waterline length of 83.7m and overall breadth of 18.3m. The depth to main deck and design draft are 7.5m and 5.9m respectively. The deadweight of the vessel is approximately 4,500t.

The vessel offers 870m2 of clear deck area with a deck load capacity of 5t/m². It is also equipped to carry liquid cargoes such as mud, drill water, fresh water and fuel oil.

Deck and life saving equipment aboard the Bravante IX OSV

The Bravante IX is equipped with an anchor windlass with a pulling capacity of 30,000lb at a hoisting speed of 30ft/m.

Life-saving equipments aboard the vessel include four 25-man life rafts and a single life raft with a capacity to carry 16 persons. The vessel is also equipped with a 4.5m-long rescue boat with davit and a 40hp outboard engine complying with SOLAS and USCG regulations.

The vessel has external fire-fighting and self-drenching deluge system.

"The propulsion system enables the vessel to cruise at a maximum speed of 14kt."

The propulsion system enables the vessel to cruise at a maximum speed of 14kt.