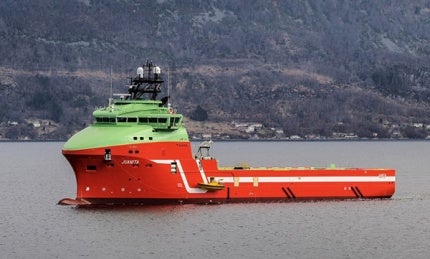 MV Juanita is a new platform supply vessel (PSV) of the SALT 100 PSV design, constructed by Kleven Maritime for its owner Ugland Offshore. The vessel is being chartered by Statoil under a two year contract, which is extendable by one more year.

Kleven Maritime was awarded the construction contract in June 2012. The vessel was launched at Kleven Verft shipyard, Ulsteinvik, in September 2013, and delivered in April of this year.

The vessel integrates a new propulsion system based on permanent magnet technology, developed by Inpower in collaboration with Scana Volda, with innovative solutions for cargo handling. The new PSV is a contender for the Ship of the Year title, which is to be awarded by Skipsrevyen in September.

The vessel implements SCR catalyst systems based on urea to cut down nitrogen oxide (NOx) emissions.

The vessel can accommodate 24 people in 12 single and six double air-conditioned cabins. Other associated rooms onboard include a hospital, a mess hall, a day room, a galley, a gymnasium, offices and rooms for cold storage, freezers and dry provision.

A Mare GTC 700-2VD Redundant man overboard boat (MOB) with a speed of 35k and capacity for ten people, and four life rafts with a capacity for 25 persons each, are present onboard the PSV. The vessel is also equipped with Fire Fighter I (FiFi I) equipment and de-icing or anti-icing systems.

The PSV sails at a maximum service speed of 14.9k and an average speed of 11k.