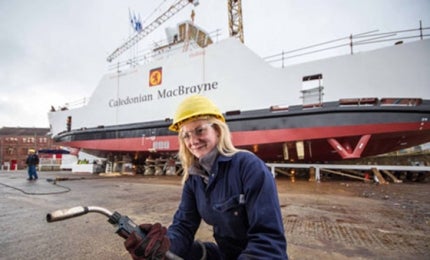 MV Hallaig is the first hybrid ferry in the world and the first commercial ship to be launched on the River Clyde during the last five years. The ferry was launched in December 2012 at the Ferguson Shipbuilders’ shipyard in Port Glasgow.

"MV Hallaig will operate between Skye and Raasay."

MV Hallaig will operate between Skye and Raasay on routes around the Clyde areas and Hebridean Islands. It is expected to enter service in the summer of 2013 after certain modifications and certifications are done at the Sconser Ferry Terminal.

MV Hallaig was developed under the Low Emission Hybrid Ferries Project. The project aims to develop new hybrid ferries incorporating the latest green technologies. It has currently created about 175 jobs and 20 apprenticeship positions for the local community.

"The two double-ended ferries will contribute to the Scottish Government’s target of reducing 34% of emissions in the transport industry by 2020."

The project comprises Hallaig and its sister ship, which is expected to be launched in 2013. The announcement to fund the project was made by the Scottish Government in February 2011. The European Regional Development Fund (ERDF) awarded £450,000 in funding for the project in December 2011.

The two double-ended ferries will contribute to the Scottish Government’s target of reducing 34% of emissions in the transport industry by 2020.

The £20m construction contract for MV Hallaig was awarded to Ferguson Shipbuilders in November 2011. The first steel for the ferry was cut at the Ferguson shipyard in Port Glasgow in February 2012, marking the start of construction works.

Design and capacity of the Hallaig ferry

Hallaig is a roll-on and roll-off (ro-ro) vehicle. The hybrid passenger ferry measures 43.5m in length and 12.2m in breadth. The draught of the ship measures 1.73m and the ship has a deadweight of 135t.

The ferry is capable of accommodating 150 passengers, 23 cars/two 44t HGVs and three crew members. Service speed of the ferry is 9kts.

Hallaig is equipped with a hybrid diesel electric propulsion system comprising two 16R5 EC/90-1 Voith Schneider Propellers (VSP) providing a total power of 750kW and two lithium ion batteries. The propellers are comprised of five blades each with rated power of 375kW. The propulsion system also includes a 2X350kW battery pack which can be charged overnight. The total weight of the system is 7,000kg.

The lithium batteries are connected to a 400V switchboard to power the propellers and are connected directly to a DC link without requiring either additional electronics or voltage conversions. Efforts are also being made to charge the lithium ion batteries using wind, wave and solar systems.

The hybrid propulsion system not only provides economic benefits but also reduces mechanical stress and noise. The ship is capable of docking without being firmly moored. The propellers are arranged diagonally instead of the conventional central positions at the front and aft. This arrangement protects the propellers during docking movements.

Hallaig is further equipped with two main diesel engines with a rated capacity of 450kW, two gearboxes, and three D13B-F MG Volvo Penta Genset system sets with a rated power of 360kWm. The estimated fuel consumption of Hallaig is about 548l per day.

The hybrid diesel electric propulsion system of the ship reduces carbon dioxide emissions by up to 20% compared with the use of a diesel mechanical propulsion system. The ferry is capable of operating solely on batteries on some crossings and on port.

The ferry was constructed by Ferguson Shipbuilders in collaboration with three other companies. Imtech provided the electric propulsion system and lithium ion batteries, and the electrical equipment and fittings were provided by Tec-Source.

The ship was designed by Seatech Engineering.

Spirit of France Car-Passenger Ferry, UK
Spirit of France is the second of two car-passenger ferries built by STX Finland, a subsidiary of STX Europe, for the ferry operator P&O Ferries.