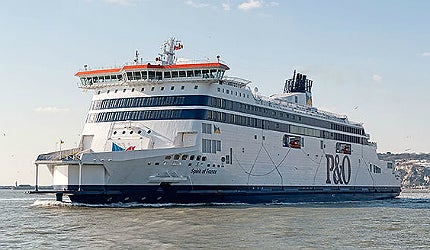 The two new-builds represent an investment of approximately €360m ($460m roughly), the largest investment made by P&O Ferries to date.

Serving the Dover – Calais route, the two sister ships are believed to be the largest ferries operating on the English Channel. They have also replaced the long-serving MS Pride of Dover and MS Pride of Calais respectively.

Design of the technically advanced Spirit of France

Spirit of France is one of the most technically advanced ferries operating across the English Channel. She is incorporated with several modern features to deal with new environmental and safety regulations. Its detailed design was developed by Deltamarin, a Finnish naval architecture and engineering company. The passenger areas were designed by SMC Design, a London-based interior design specialist.

The ship’s hull form was developed after considering the water depth and wind speed along the route it would operate on. Extensive model tank tests were also conducted at Maritime Research Institute Netherlands (MARIN) in Holland prior to finalising the hull shape. These efforts lead to the development of a hull form with efficient hydrodynamics.

The unique hull form and propulsion system allows the ship to cruise in shallow water with minimum drag. The hull design was also optimised to achieve greater performance with excellent manoeuvring characteristics.

An important energy saving feature in the ship is the use of boilers to heat water using the waste heat generated from exhaust gas and using the steam to generate power for the water treatment plant.

The vessel was built with two engine rooms – one fore and one aft, in order to comply with SOLAS SRtP standards, which demand safe return of ships to port within six hours of an incident.

Agreement between P&O and STX Europe

In June 2008, P&O Ferries announced that it has signed a letter of intent with STX Europe to build two large ferries. Construction contacts followed in August. Steel production for the second ferry, Spirit of France, was commenced in December 2009.

"Serving the Dover – Calais route, the two sister ships are believed to be the largest ferries operating on the English Channel."

The keel laying ceremony was held at STX Europe’s Rauma shipyard in Finland in June 2010. The hull, designated NB 1368, was floated out of its building dock in February 2011 for final fitting out. Final sea / yard acceptance trials were completed in early January 2012. The ferry was formally handed over to her operator P&O Ferries on 24 January 2012, with operation commencing 15 days later.

Like her sister ship, Spirit of France was built by block construction method wherein pre-fabricated hull sections fitted with many essential components are welded together.

The 47,600 gross tonnage ferry can carry 2,000 passengers and transport 180 freight trucks and 195 passenger cars. She measures 213m in length and 31.5m in width, and has been provided with 3,746 lane metres to accommodate trailers, cars and other cargo.

Oriana is the first cruise ship commissioned for P&O Cruises. Built by Meyer Werft, the vessel entered service in April 1995.

The journey between Dover and Calais takes just one and a half hours, therefore Spirit of France does not have cabins and hence no room services. Seating, however, is arranged in the club class lounge.

There is a bar, located on deck eight, which is the place where passengers can socialise while enjoying a drink. The family lounge is also located on the same deck. This place is suitable for passengers travelling with children. Light snacks, tea, coffee and soft drinks are offered here.

The club lounge is the most luxurious and stylish venue. It is located on deck nine and features a private outside deck outfitted with cruise-style furniture. A self-service food court is located on the other end of the deck. A varied range of cooked meals, salads and desserts are offered here.

Freight drivers get five-star treatment in the route masters lounge. The lounge is provided with amenities, such as private showers, a restaurant, entertainment facilities and relaxation area.

Propulsion of P&O’s Spirit of France

The Spirit of France is powered by four MAN 7L48/60CR diesel mechanical engines, each rated at 7,600kW. She is also installed with four MAN 7L21/31 auxiliary engines rated at 1,424kW each.