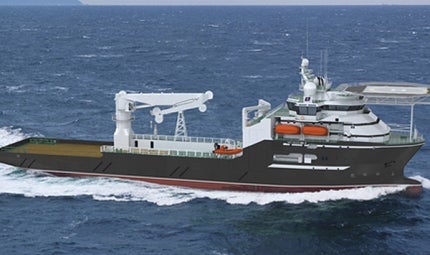 Olympic Boa is a subsea support and construction vessel owned by Olympic Shipping. Kleven Verft received a contract in June 2012 to build the vessel at an estimated cost of NOK600m (approximately $100.3m).

The vessel was christened during a naming ceremony held in March 2014 and was handed over to the owner in April 2014.

Olympic Boa was chartered to Boa Marine Services under a three-year agreement, with further options. The charter period began in the second quarter of 2014.

Olympic Boa is a Marin Teknikk MT 6022 MK II design with an overall length of 115.4m and moulded breadth of 22m. Its length between perpendiculars is 108.25m, while depth to main deck and maximum draft are 9m and 7.12m respectively. The vessel has deadweight of approximately 7,150t at maximum draught.

The main deck of the vessel covers an area of approximately 1,300m², and has a width of 21m and maximum loading capacity of 10t/m². The vessel has one moon pool measuring 7.2m long and 7.2m wide.

Deck cranes aboard the vessel

Olympic Boa is equipped with a fully active heave compensated (AHC) offshore crane with a wire length of 3,000m, and deck lift of 250t at an outreach of 650m and 135t to a water depth of 3,000m. It is also provided with one hangar, placed on the main deck, covering an area of 211m².

Polar Onyx is an offshore construction vessel (OCV) built at the Ulstein Verft shipyards in Norway.

A 250t offshore pedestal crane with an AHC main winch with a capacity to carry 2,500t at 5.5m outreach is also provided on the main deck. The two auxiliary winches by Caterpillar provide access to depths up to 2,500m with a lifting capacity of 20t at 36m outreach, while the other auxiliary winch has a wire length of 50m and a capacity of 5t at maximum outreach of 20m.

Olympic Boa has one anti-heeling system with two transfer pumps, each with 1,500m³/h capacity.

The vessel features one work-class remotely operated vehicles (WROVs) hangar, installed with launch and recovery systems (LARS) incorporated into the two large WROVs deployed on the port and starboard sides. It is also fitted with two permanent WROV systems, providing access to depths up to 4,000m.

An aluminium helicopter deck with a capacity to handle maximum take-off weight of 15t is available for a Sikorsky S-92 helicopter. It complies with the Norwegian continental shelf, IMO and UK 437 regulations.

Two enclosed lifeboats on both sides of the ship accommodate up to 50 people each. The vessel also features one life raft capable of carrying 30 people each side, one lifeboat PS and one man overboard (MOB) fast rescue craft. Also provided onboard are 110 survival suits, emergency evacuation breathing device (EEBD) masks and life jackets.

Control rooms and offices aboard the ship

The boat deck houses the ROV offline room, the shift supervisor and the project engineer office, while the main office is on the captain deck.

"The propulsion system allows the vessel to cruise at a maximum speed of 15.8k."

Olympic Boa offers accommodation for 110 personnel. It has 32 one-man cabins and 39 two-man cabins. Other facilities include a hospital, a reception and a mess with 50 seats.

The propulsion system allows the vessel to cruise at a maximum speed of 15.8k.