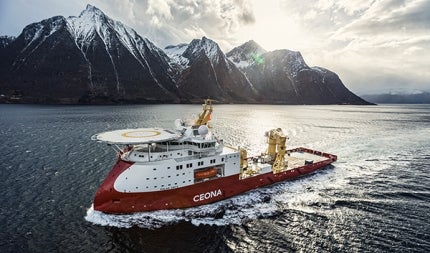 Polar Onyx is an offshore construction vessel (OCV) built at the Ulstein Verft shipyards in Norway for GC Rieber Shipping, who ordered for the vessel in June 2012. The vessel was handed over to the owner in March 2013 following a naming ceremony in February 2013.

Polar Onyx is designed to provide offshore installation or construction services for subsea umbilicals, risers and flowlines (SURF), and to perform inspection, maintenance and repair (IMR) works. It was chartered to British company Ceona Chartering (Ceona) under a five-year agreement with a scope to extend by five more years.

Ceona and Odebrecht Oil and Gas together entered into an agreement with Petrobras in January 2014 to offer submarine construction services using Polar Onyx as the pipe lay support vessel (PLSV) from May 2014 in Brazil.

Polar Onyx features an advanced Ulstien X-bow design of type SX SX121. Its overall length is 130m, moulded breadth is 25m, depth to main deck is 10m and maximum draft is 7.6m, while the length between perpendiculars is 122.1m. The vessel’s deadweight is approximately 8,207t without vertical lay system (VLS) and 7,194t with VLS.

Polar Onyx is capable of accommodating 130 people. It has 12 state cabins with day-room and bedroom, 36 one-bed cabins and 41 two-bed cabins. The ship is designed with floating floor on five decks to limit noise and vibration levels.

Also present are an ROV workshop, deck pantry, separate wardrobes for male and female, laundry room and laundry handling room.
The vessel features a helicopter deck, which can bear a maximum take-off weight of 12.8t and complies with DNV, UK-CAA: CAP-437, UKOOA and Norwegian CAA standards and regulations.

The vessel also has an elevator with a capacity for 13 persons with eight stops and a maximum capacity of 1,000kg.

Polar Onyx is equipped with a 12t knuckle boom deck crane with a maximum outreach of 16m at a dynamic factor of 3.4.

A 250t offshore pedestal crane is also provided, with an active heave compensated (AHC) main winch on tank top providing access to depths up to 3,000m with a safe working load (SWL) of 20t at 36m outreach and 250t at 14m outreach. The crane also contains an auxiliary winch AHC with a capacity of 20t at maximum outreach of 40m.

Pipelay and other equipment

ROVOP will provide hydraulic, work-class ROV services to Polar Onyx and Ceona Amazon vessels as part of a contract signed with Ceona in October 2013.

"A 2,000t carousel system and additional equipment ordered from RentOcean will be installed once the ship starts operations in Brazil."

The vessel has ultraviolet (UV) sterilisers and a vacuum sewage treatment plant as per US Coast Guard (USCG) regulations. Two fresh water generators, each with a capacity of 15m³/day, and an osmosis freshwater plant, with a capacity to generate 25m³ of fresh water daily, are also fitted.

A 2,000t carousel system and additional equipment ordered from RentOcean will be installed once the ship starts operations in Brazil.

Safety equipment aboard the vessel comprises two enclosed lifeboats with davits capable of accommodating 80 people each, two life rafts capable of carrying around 25 people each and a man overboard (MOB) boat with one armed davit.

Polar Onyx is powered by a diesel electric power and propulsion plant equipped with six generator engines, each of 2,880kW.

The propulsion system includes three main azimuth fixed pitch propeller (FPP) thrusters with nozzles, and two forward tunnel thrusters of controllable pitch and variable speed with a power of 2,140kW at 900rpm. With a controlled frequency converter, the three electric propulsion motors generate a maximum of 3,000ekW power each at 1,200rpm. An emergency generator of 300ekW is also provided.

The propulsion system allows the vessel to cruise at a maximum speed of 15.1k.