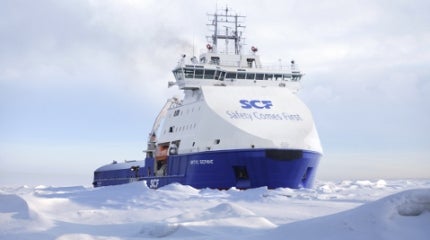 NB-506 Vitus Bering is the first vessel in a series of two multifunctional offshore icebreaking supply vessels (MIBSV) ordered by SCF Sovcomflot. It is named after the Russian explorer Vitus Bering, who discovered Alaska.

SCF Sovcomflot placed the order for the two MIBSVs in December 2010 with Archtech Helsinki Shipyard, a joint venture of STX Finland and United Shipbuilding Corporation. NB-506 was delivered four months ahead of schedule in December 2012. The second vessel, NB-507 / Aleksey Chirikov, is scheduled for delivery in April 2013.

"NB-506 is used at Sakhalin-1 Arkatun-Dagi gas field as a supply vessel for the Exxon Neftegas platform."

The investment for the two MIBSVs is $200m, which is being financed through a loan from Alfa-Bank of Russia and a 12-year export credit facility worth $160m from Finnvera, Finnish Export Credit and ING Bank.

NB-506 was assembled at Arctech Helsinki Shipyard in Finland and is now being used at Sakhalin-1 Arkatun-Dagi gas field in the Sea of Okhotsk as a supply vessel for the Exxon Neftegas platform. The vessel will also protect the platform from ice. Russian Maritime Register of Shipping assigned her one of the highest ice category ranks, Icebreaker6.

Construction works for the vessel commenced in July 2011. The keel was laid in January 2012 and she was launched in June 2012.

Out of the overall 21 blocks used for the construction of the ship, 17 were built at Vyborg Shipyard and four blocks were built at Archtech Helsinki Shipyard.

Arctech provided the design for the vessel and procured the main components during the construction phase. It also took on the outfitting of the blocks, carried out the painting works, assembled the hull and rendered outfitting and commissioning services.

The foredeck of NB-506 Vitus Bering is fully covered to protect the mooring equipment from icing.

The vessel has been designed to withstand the harsh environmental conditions in freezing temperatures of around -35°C and is capable of operating independently on ice that is 1.7m thick, while maintaining a speed of 3kt. The vessel is capable of passing through ice ridges as deep as 20m.

The hull of the vessel was specially designed to enable its stern to first face the ice prior to the bow thus providing the vessel a reverse movement. The vessel is also equipped with a dynamic positioning system.

Besides icebreaking, the vessel has also been designed to carry out rescue operations for 195 people, oil spill containment operations and fire fighting, and carry various goods. The vessel is also equipped with a Glonass satellite navigation system.

The vessel features four Wartsila diesel generators that have a total output of 18,000kW and two Azipod propulsion units with a power output of 6.5MW each.

NB-506 Vitus Bering is capable of sailing at 15kt in open water.

The hardware system in the vessel was installed by OAO OSK while certain navigation systems were installed by Transas.