Between Al Wakrah and Mesaieed, Doha

Expand
Qatar’s New Port Project is considered to be the largest greenfield port-development project in the world. Image courtesy of AECOM.
The first concrete for the quay wall of Qatar's New Port Project (NPP) was laid in July 2012. Image courtesy of AECOM.
CSA International carried out the mitigation works, including the relocation of approximately 10,000 hard coral locations within the NPP site. 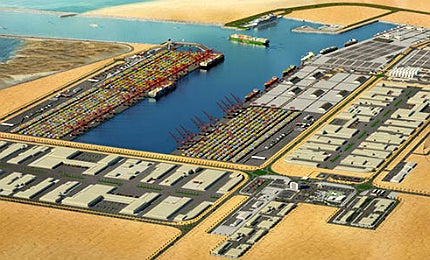 Qatar constructed a new container port located between the municipalities of Al Wakrah and Mesaieed. The new port replaced the existing Doha Port when fully operational in December 2016.

The initial idea to construct the port was announced in June 2007. The environmental permit for the construction of the port has been realised and the construction works began in October 2011. The first concrete for the port’s quay wall was laid in July 2012.

It is considered to be the world’s largest port development project built on unused land. The project attracted an investment of QR27bn ($7.4bn).

The New Port Project (NPP) has been named Hamad Port in February 2015. The NPP also involved the construction of a new naval base for the Qatar Emiri Naval Forces and the Qatar Economic Zone 3 (QEZ3) Canal.

The NPP forms part of the Qatar National Vision 2030, which aims at converting Qatar into a developed country by 2030.

The port eases the import of goods, which enables other development projects in Qatar to be realised, as the country prepares to host the FIFA World Cup in 2022.

The port features three container terminals, each with a handling capacity of two million TEUs per annum. It is linked to the proposed Gulf Cooperation Council (GCC) rail network, linking the port to six GCC countries, including Qatar, Oman, the UAE, Saudi Arabia, Kuwait and Bahrain.

The QZE3 Canal covers an area of two square kilometres. It acts as a major economic hub, and enhances the export and imports of goods at the airport.

The dredging works were carried out using two self-propelled rock cutter suction dredgers and dredging material was transferred using about 500 dump trucks for the relocation of the naval base.

The 8.5km quay wall utilised more than 35,000 concrete blocks weighing between 40t and 90t. The construction work witnessed the excavation and rockblasting of 70 million cubic metres of material.

"The port eases the import of goods, which enables realisation of other development projects in Qatar."

A $35m contract for the design and master plan of the port was awarded to WorleyParsons, which in turn subcontracted Royal Haskoning to assist in the port design.

The dredging work for the access channel was carried out by Middle East Dredging Company (MEDCO). Financed by Qatar Islamic Bank (QIB), the $1.23bn contract also involved the execution of the dredging works for the basin, reclamation for the naval base and construction of the two outer breakwaters.

The construction of the port basin, the quay walls and the inner breakwaters was undertaken by China Harbour Engineering Company (CHEC).

Telleborg was contracted to supply 829 fender systems, 606 bollards and ladders for the project.

The mitigation works, including the relocation of approximately 10,000 hard coral locations within the project site, have been assigned to CSA International.

Thales was awarded a contract to provide an integrated security solution for the Hamad Port.

Khalifa Port is located about five kilometres offshore from Taweelah, in Abu Dhabi, on what is a reclaimed artificial island. The port, once fully developed, will be one of the largest ports in the world.